We go around the world to highlight which MMA prospects are worth your attention this weekend.

Here’s who to watch out for in our latest Weekly MMA Prospect Report. Also, I will highlight the three prospects who I believe have the highest ceiling with an asterisk.

Russia’s own Anatoly Malykhin has run through all his opposition to date. He is a Master of Sports in Freestyle Wrestling and is the 2016 heavyweight Euro Grappling champion. In his MMA career, he’s wasted no time getting the fight to the mat getting big takedowns and showing his strength. He’s very physical, proving that in his last two bouts with a kimura finish. He has some slick grappling for a big guy. While he doesn’t have much experience, he’s beat good experienced fighters. He fights former UFC fighter Fabio Maldonado (25-13). This is a major test for Malykhin.

Soares was a competitor on the 22nd season of The Ultimate Fighter, where he lost his entry fight to Julian Erosa. Soares is a really talented fighter with stellar skills on the mat. He has solid chokes, winning six times by rear-naked choke. He dominates on the mat, maintaining control when his opponent tries to scramble and generally living up to his status as a jiu-jitsu black belt. He does need to work on his striking defense, though. He fights Anderson Hutchinson (7-2), who is coming off a loss.

While she is very very early in her career and only 21-years-old, Melissa Martinez is a major prospect in the strawweight division. Martinez has not shown much on the mat because she wants to be on the feet the entire time. Martinez has great cardio with her constant footwork and effective side-to-side movement. Melly has the ability to break an opponent down with her chopping leg kicks. She also displays a quick release with her dangerous head kick that she has won a couple of times with. Martinez puts combinations together with her hands very well and her explosiveness and hand speed are solid. She really looks promising at a young age in her career. She fights Caroline Gallardo (3-2), who Melly should beat.

Rock is still young in his MMA career but he has an extensive background in Brazilian Jiu-Jitsu. Rock hasn’t shown a lot on the feet but he does like to kick with his long frame at 6’0″. His grappling, though, is top notch. His best weapon is his back take, but on the mat, in general, is where he wants to be. Rock has a 100-percent finish rate and has even won by a rare python trap. He fights Danilo Sarmiento Jr (3-0).

Shore has made some good strides in his striking with good output, combinations, and fight-ending knees in the clinch. He is a slick wrestler with nice timing on his takedowns. If he can’t get it down the first time, he has shown the ability to adjust and chain-wrestle his opponents. On top, he is a nightmare for his foes. Shore is a pro at passing into better positions, scrambling well and hunting submissions. Shore’s ground-and-pound is a big fight-changer, too. He loves to throw vicious elbows often. He fights Scott Malone (6-1), who is a good wrestler as well, but Shore is better.

Jones fights out of Blaenavon, Wales, and is a nice prospect at only 24-years old. Jones is a good wrestler who has some very well-timed level changes and is very good at taking the back where he has two rear-naked chokes. Jones’ grappling is good in general but his ground-and-pound is also a difference maker. On the feet, Jones is always going to be in your face pushing you against the fence, landing knees and lethal elbows in the clinch. He’s always aggressive, throwing a lot of volume, and really has solid cardio with the pace he brings. He fights Donovan Desmae (12-5), and Jones is better everywhere.

Raisov is a world-class talent at only 23 and has suffered just one loss to former ACB featherweight champion Marat Balaev, who he rematched later on and took the title from. His stand-up is very technical but still explosive. He uses a lot of spinning kicks and flying knees but he throws them so fast that opponents can’t really react quick enough to counter. Raisov is just exceptionally fast and very light on his feet. Raisov moves in and out very well and on the mat he has six submission wins, so he is more than dangerous there as well. But his wrestling is a big weapon for him as he can get takedown after takedown, beating his opponents physically and mentally. He fights the well known Alexander Sarnavskiy (36-7), who is solid but I think Yusup wins with wrestling.

With a background in combat sambo, Ismailov is a powerhouse athlete who is very fun to watch. He does have power on his feet but Ismailov has every desire to get his fights to the mat. When you tune in to watch Ismailov you would think you’re watching a professional wrestling match with the way Ismailov picks guys up and drives them to the mat. It’s just awesome. He’s insanely strong and can elevate his opponents at any time and put them down. He has a few submissions but has better ground-and-pound. He fights Vyacheslav Vasilevskiy (33-6). 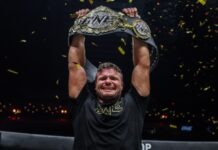