‘The Real Deal’ is moving on to the next stage of his career, as Ross Pearson, the Ultimate Fighter 9 winner, has announced his retirement.

After a rough run in recent years saw him go 1-6 in his past seven fights, Ross Pearson has decided to hang up the gloves. Pearson, winner of The Ultimate Fighter 9 at lightweight, spent a decade with the UFC, getting his break on the reality fighting show, and becoming a fan favorite. Monday, he announced he was stepping away from the sport that has been his life since his pro debut in 2004.

Writing on social media, Pearson said that “after some long hard talks, and careful consideration with my family, friends and team,  I’ve decided it’s time to retire as an MMA fighter. As hard as that is to say, it’s not the end of my career as a competitor. I’ve always been a fighter, and right now I am keeping my mind open as to what’s next for me.”

“I’d like take this time to thank everyone at the UFC for having me for the past 10 years, Dana White for seeing something in me and believing in me for all these years ago,” he continued. “To my family, my teammates, and my friends, your support has been endless and I appreciate all of you.” Pearson included a special thanks to some of his earliest training partners and coaches, then added “and to all my fans, thanks for all the love & support!”

Pearson (20–16 (1)), a native of Sunderland, England, began his career in the U.K.’s regional scene, compiling an 8-3 record and capturing the UF lightweight championship along the way. He’d then join The Ultimate Fighter 9 in 2009, a season that pitted the best of the U.S. against the best of the U.K. Two finishes in three wins over A.J. Wenn, Richie Whitson, and Jason Dent punched his ticket to the finale on June 20, 2009 in Las Vegas. A unanimous decision win over Andre Winner captured the TUF crown for ‘The Real Deal’ — who would go on to win his next two bouts.

That, however, would also be the last time Pearson was able to win consistently in the UFC. Notable wins over the likes of George Sotiropoulos, Ryan Couture, Gray Maynard, Sam Stout and Paul Felder came, but so did losses against Cub Swanson (in a failed run at featherweight), Edson Barboza, Al Iaquiunta and Diego Sanchez.

However, even as the losses piled up, Pearson remained competitive, and a fan favorite. His final win came at UFC 221 in February 2018, when Pearson won a unanimous decision against Mizuto Hirota. His last fight, at UFC Philadelphia last month, saw Pearson suffer a first round TKO defeat against Des Green. The loss was just the second time Pearson had been stopped since 2014.

Pearson finishes his career with three UFC Fight of the Night awards, and a Performance of the Night for his knockout of Sam Stout at UFC 185. You can read Ross Pearson’s full farewell message below. 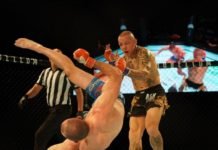 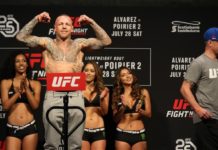 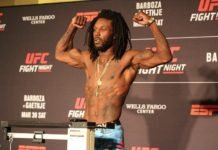