Announced by the promotion on Tuesday, UFC president Dana White will be a special guest for the next Titan FC event — Titan FC 54.

Dana White will be at Titan FC 54 later this month. White will be there as part of his YouTube series Dana White: Lookin’ For a Fight, alongside co-hosts Matt Serra and Din Thomas. The UFC President was most recently at LFA 63 last weekend, where he scouted out talent among the fighters on that card.

At LFA 63, White spoke to two fighters after they won their bouts. Gabriel Silva (brother of Erick) was signed to the UFC after knocking out previously undefeated competitor Jake Heffernan in the co-main event in just 83 seconds. Meanwhile, 34-fight regional veteran Derrick Krantz will be given another opportunity to prove himself in front of White, as he earned a spot on Dana White’s Tuesday Night Contender Series airing this summer after his knockout victory over Bellator veteran Justin Patterson.

Titan FC 54 takes place April 26, 2019 from the Xtreme Action Park in Fort Lauderdale, Florida. Two Titan FC titles will be on the line. In the main event, former The Ultimate Fighter 22 competitor and current champion Jason Soares (12–0) will be taking on Anderson Hutchinson (7-2) for the featherweight championship. Soares was featured on our list for potential prospects for the Contender Series. The co-main event features an interim lightweight title bout between Brazilians Rafael Alves (17-9) and Felipe Douglas (17-4). 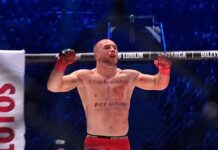