The Contender Series is set to return, now airing on ESPN+ — but which prospects are likely to turn up on the third installment of the show?

Dana White’s Tuesday Night Contender Series was recently confirmed as returning for a third season, not that there was ever any question. As an entry path into the UFC, the show has proven popular thus far. The third season will kick off in June or July, and interest should be high.

Last week, we looked at 25 prospects who deserved to be a part of the show. Now, we have 22 more deserving names. Left out will be fighters that fought on the previous two seasons, though some may return.

Punahele Soriano really had a breakthrough year last year with three big wins. He fought for V3, Titan FC, and LFA. He trains out of a good camp in Xtreme Couture and that has led him to an undefeated career with a 100-percent finish rate, ending all of his fights in the first round. Soriano has a background in wrestling and has shown that in his MMA career thus far. He has heavy hands but has wasted no time getting his fights to the mat and pounding away with very sound striking.

Victor Henry came into 2018 with a 1-3 record in his last four fights, but ended up going 4-0 for the year. He has never looked better and has key wins over current UFC fighters Anderson dos Santos and Kyler Phillips. Henry has shown he’s well-rounded to go along with his a successful background in catch-wrestling. He thrives in scrambles and hunts for submissions actively, being well-versed on the mat. His striking is getting better with a solid base of kickboxing.

Kyle Crutchmer has a background in wrestling with a very successful Division 1 career at Oklahoma State University. He was a two-time All-American and a two-time Big 12 champion. Based on what’s out there on Kyle, he obviously has excellent wrestling. He’s also shown good and active ground-and-pound. He’s a guy that I’m shocked Bellator hasn’t signed but it would be a big move from the UFC.

Julius Anglickas is born in Lithuania and is now residing in St. Louis. Anglickas was a Division 1 college football player for Oregon State. He’s a solid wrestler with good set-ups and execution. The Lithuanian is a dominant wrestler with top-level grappling and active ground-and-pound. He’s got some really good jiu-jitsu for a 205er. Last February, he won the LFA light heavyweight title. That is likely his ticket to the Contender Series.

Cole Ferrell hasn’t been touched in his professional career and has rarely ever been in any kind of trouble. Ferrell has shown glimpses of power in his hands but is a good wrestler with a very solid ground game. He has shown that he has a tight grip when he gets the neck, hence why his six submission wins have all come by way of a choke. Ferrell, only at 25, has a lot of things going right for him in his career as of now and is slowly making a name for himself. If there is one knock on Cole Ferrell, it would be that he needs a step up in competition. That would be available to him on the Contender Series.

In her pro debut, Hannah Goldy beat Gillian Robertson who is now a current UFC fighter and 3-1 in the Octagon. Goldy’s fiancee is also a former UFC fighter, Alex Nicholson, giving her the “Queen of Sparta” nickname. Her foundation style is boxing as her hands are sharp. There is still a lot she needs to show as there isn’t much footage but it’s a fact that she wants to keep the fight standing where she is very technical. The flyweight division needs all the talent it can get and Goldy would be a good fit.

Jason Soares was a competitor on the 22nd season of The Ultimate Fighter, where he lost his entry fight to Julian Erosa. Soares is a really talented fighter with stellar skills on the mat. He has solid chokes, winning six times by rear-naked choke. He dominates on the mat, maintaining control when his opponent tries to scramble and generally living up to his status as a jiu-jitsu black belt. He has beaten solid competition as of late and has won the Titan FC title with already one defense. 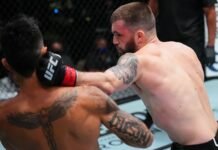