The Sunday Morning Cornerman podcast recaps the UFC Philadelphia card, plus a little anecdote about this weekend’s CES show in Connecticut as well!

UFC Philadelphia — UFC on ESPN 2, officially — went down Saturday in the City of Brotherly love. The card, of course, was topped with a hotly anticipated lightweight clash between Justin Gaethje and Edson Barboza.

If Gaethje doing his traditional back-flip off the octagon didn’t give it away, ‘The Highlight’ absolutely came out victorious. A first round knockout of the Brazilian, that set the crowd at the Wells Fargo Arena on fire.

The Sunday Morning Cornerman podcast with John Franklin and Keith Shillan recap the card from top to bottom, including the controversial Casey Kenney vs. Ray Borg fight, Michelle Waterson’s big win, and yes, of course, Justin Gaethje — who earned yet another post-fight bonus Saturday night in Philly!

The crew also takes a brief sidetrack to this past weekend’s CES MMA event, which had press row somewhere up in the nosebleed section. Binoculars not included. 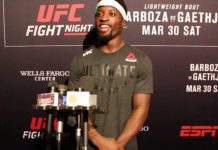 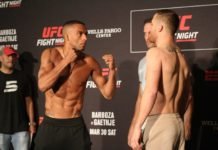 UFC Philadelphia Aftemath: If You Want Violence, You’ve Got It