Justin Gaethje won two fights in a row for the first time in his Octagon career at UFC Philadelphia, so why do fans gravitate towards him?

In case you’ve been living under a rock, Justin Gaethje defeated Edson Barboza via first-round knockout last night at UFC Philadelphia. In the fight, we saw Barboza and Gaethje go leg kick for leg kick, Justin get rocked and Barboza’s defeat. Fans love watching Justin Gaethje fight. Why is that? Let’s dive deeper into the “he’s a brawler” aspect of it.

Justin Gaethje is fearless. He is the epitome of anyone, any time. Ever since coming into the UFC, Justin Gaethje has taken the hardest fight he could. He’s also won post-fight awards each time. He has already fought Michael Johnson, Eddie Alvarez, Dustin Poirier, James Vick and now Edson Barboza. While all of the fights haven’t gone his way, fans still love the fearlessness and ferocity that he brings.

It’s that fearlessness that fans crave in a fighter. Much like the rise of Conor McGregor, who fought anyone and aimed to take on the invincible Jose Aldo, Gaethje has the same attitude. He has the warrior spirit that Chuck Liddell and Robbie Lawler have that make them such popular fighters. He has the traits of a hero at war who, while maybe outmatched by skill, knows he has more heart than his adversaries. He’s a warrior, through and through.

Seeing our heroes through him

It’s always those type of tales that last through the centuries, told as folklore from generation to generation. There’s Beowulf, King Arthur, Luke Skywalker, Miyamoto Musashi, King Leonidas and countless more. These fearless leaders inspire generation after generation. That’s what Justin Gaethje brings to fight fans. He reminds them of the heroes they looked up to and read about as kids.

Fans know that he can beat anyone in his division. It’s just a matter of if he does. The controlled chaos Gaethje brings is exciting. What were to happen if he fought Conor McGregor, Tony Ferguson, or even the unstoppable Khabib Nurmagomedov? That’s what fans have been clamoring for since Gaethje got in the UFC. He’s just two weeks’ notice away from taking on Khabib and potentially becoming world champion. 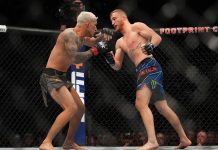