Bellator 219’s Shawn Bunch feels he’s a different fighter as he continues in his second run with the promotion this weekend, taking on Dominic Mazzotta in Temecula, CA.

Bantamweight Shawn Bunch (8-3) will step into the cage for the second time in his second run in Bellator this Friday at Bellator 219 in Temecula, CA. The NCAA Division I All-American had solid run in his first go, notching a 4-2 record in Bellator the first time around. A loss to future champ Darrion Caldwell sent him packing, however.

Back on the regional scene, he won three straight bouts, culminating in his return to the promotion last November, where he forced former two-division champ Joe Warren to submit to punches in just over ninety seconds. With that in mind, Cageside Press asked how things had changed between his two runs.

“I’m a different fighter this time around coming into Bellator,” Bunch replied.

“I’m more experienced, I’ve been in the game a little bit longer,” he said of the Shawn Bunch who returned to the Bellator fold last year. He admitted that, after going back to the regionals, getting back to the big show “wasn’t as easy as it was my first time.”

Now that he’s back, the key difference seems to be leadership. “Scott Coker’s been doing a great job with the promotion,” Bunch observed. “I’m happy to be part of the Bellator family again.”

As for what he’s hoping to achieve, “my goal is still the same, I want to be the best. I want to win a major world title.”

As a fighter, “what’s changed over the years is getting that experience, just mentally being stronger, more confident, more comfortable in the cage,” Bunch added. Looking back on his beginnings in MMA (Bunch made his pro debut with Bellator in 2012), he recalled that “when I first came out, I barely knew what I was doing.” The bantamweight saw himself as “mainly just a wrestler, just going in there, maybe throwing a punch, trying to take [his opponent] down. I wasn’t really comfortable in there, I didn’t really have the confidence level I do now. I wasn’t as well rounded.”

“They just know that wrestlers are going to shine, it’s a good art to invest in when you’re looking to build a star. And wrestlers make stars.”

Today, Bunch feels that “I’m just a better fighter, and it’s a perfect time for me to get back with Bellator and showcase my skills for the world on this platform. It’s amazing to be a part of it.”

Bellator certainly has found success promoting wrestlers, and has invested heavily in collegiate wrestling stars over the years. Bunch feels that the promotion recognizes how “usually history repeats itself, and most of the best MMA fighters are world class wrestlers.”

Looking at the success of fighters like Daniel Cormier, Ryan Bader, Michael Chandler, and Henry Cejudo, that’s hard to argue. “Most of the major promotions, their champions are wrestlers. They just know that wrestlers are going to shine, it’s a good art to invest in when you’re looking to build a star. And wrestlers make stars.”

“They just know, wrestling is the way to go. These guys are tough. We’re tough,” he continued. “We’re a different breed, built differently, and know what it takes to be a champion.”

Bunch agrees with the idea that wrestling, at this point, is the most important base to have in MMA. “I think it’s the most important sport. Being a wrestler, going through that grind, knowing what it takes, that helps you out too.” Plus the weight cut, how many matches wrestlers see in a year, “that’s all experience that helps you out in the long run dealing with MMA.”

Bunch’s own experience culminated in a big win at Bellator 210 with the Warren fight. From that bout, “I grew more confidence in my abilities,” Bunch told Cageside Press. He wants to “keep the momentum going in my favor throughout this Bellator run. I learned a lot, even though it was a short fight I learned a lot, just everything from the warm up to when I walk out, how I want to feel, how I want my body to feel, everything was just a learning experience. I improved in that fight, and I keep growing, keep growing, getting better each fight.”

At Bellator 219, Dominic Mazzotta is the next man in line for Bunch. Giving a quick breakdown of his opponent, Bunch observed that “he’s well rounded, he’s tough. He trains with a tough team down in Florida.”

“He’s been in there with some of the best guys. I’m expecting to see everything from him,” Bunch admitted. “He likes to wrestle a lot. I expect to see him try to mix his wrestling in with his kicks and solid jiu-jitsu.” Yet despite how well-rounded Mazzotta is, Bunch feels it’s going to be a good fight for himself.

And even though Mazzotta likes to wrestle, Bunch isn’t worried about it turning into a stand-up war between grapplers. “It depends, you know. I feel like I can take the fight where ever I want, if that’s what I want to do. I don’t think his wrestling is as good as mine. But MMA is different, so you can’t overlook his wrestling.”

How about a finish? Bunch isn’t one to give predictions, but “if the opening presents itself, I’ll take it” he said in regards to a stoppage.

At 36, Shawn Bunch is closer to the end of his career than the beginning. But he isn’t feeling his age just yet. “I focus a lot on recovery. I’m able to still train at a high level,” he said of the age question. “My body really hasn’t broken down like that yet. I’ve really only had one or two surgeries, ever, through my athletic career.”

That goes right back to when he was six years old. “I think I’ve held up pretty well,” he stated. “When I’m not able to train at a high level, and still compete at a high level, I’ll pack it up. I’ll talk to my coaches, team, and they’ll let me know. They will know when I’m not ready, when I’m not into it. And I’ll know too.”

The age factor does change his approach to fighting in a different way, however. “I know that there isn’t much time left in this sport. So I want to make my run, make my money, get the right fights for me to end happy.”

The right fights started with Warren. “I beat the former two-division champ, he just fought for the title two fights before that.” Mazatto is the next step, “another guy with a good record in Bellator, another name.” Then when it comes to title talk, “I’m pretty sure one or two fights, I’m right in the mix.”

Shawn Bunch takes on Dominic Mazzotta at Bellator 219 this Friday, March 29 at the Pechenga Resort and Casino in Temecula, CA. The fight airs as part of the preliminary card, streaming via Cageside Press and the Bellator MMA app. 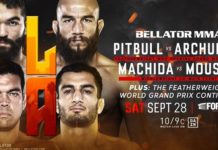