Bellator 228’s preliminary card featured the return to action of Antonio McKee, one half of a father-son duo competing Saturday.

A big weekend for Bellator MMA was topped by the return of the featherweight grand prix at Bellator 228 in Los Angeles, CA on Saturday night. The promotion was once again at The Forum, and this time, Patricio Pitbull was putting his 145lb belt on the line against Juan Archuleta. That fight was part of the tournament, which would have the belt on the line every round. The rest of the opening round fights remaining were also set to go down. As was a middleweight scrap between Gegard Mousasi and Lyoto Machida.

Earlier in the night, names like Shawn Bunch and Antonio Mckee were in action. McKee in particular stood out, at 49-years old and sharing the card with son A.J., who was fighting in the grand prix.

Making her debut in MMA entirely, boxing champ Ava Knight was in the spotlight. And another star from another discipline, A.J. Agazarm, returned.

Check below come fight time, 7:30PM ET, for full results and a live stream of the early action. 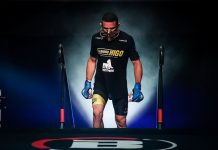 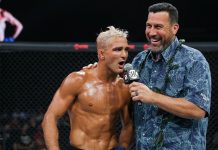