Tai Tuivasa looks to rebound from a loss against top contender Junior dos Santos when he takes on Blagoy Ivanov at UFC 238.

The Daily Telegraph was the first to report the heavyweight addition to UFC 238.

Both Tai Tuivasa and Blagoy Ivanov have losses to Junior dos Santos representing their only losses in the UFC. Ivanov, unlike Tuivasa, had a chance to rebound from this defeat whereas Tuivasa has been on the shelf since December.

Tai Tuivasa is one of Australia’s brighter stars who recently suffered his first career loss. He entered the Octagon as the Australian Fighting Championship heavyweight titleholder and undefeated at 5-0. “Bam Bam” kicked off his run in the promotion with a pair of crushing first-round knockouts followed by a win against former champion Andrei Arlovski. His December loss against JDS was Tuivasa’s first main event in the Octagon.

Blagoy Ivanov defended his WSOF/PFL heavyweight title four times before joining the big stage. Ivanov got a tough welcome to the Octagon, headlining opposite former champion Junior dos Santos and losing a five-round decision. Ivanov welcomed back Ben Rothwell to the cage after the latter’s suspension. It was a tightly contested fight, but Ivanov came out on top.

Tai Tuivasa vs. Blagoy Ivanov happens to be the first male fight added to UFC 238. The other fights on the card are Valentina Shevchenko vs. Jessica Eye for the flyweight title, and a pair of top contender fights in Nina Ansaroff vs. Tatiana Suarez, and Katlyn Chookagian vs. Joanne Calderwood. The event takes place on June 8 in the United Center of Chicago, Illinois. 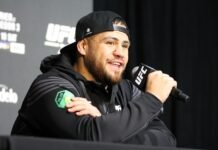