Molly McCann threw down with Priscila Cachoeira in her home country at UFC London, winning a unanimous decision despite experiencing major swelling in her left eye.

Molly McCann, affectionately known as Meatball Molly, is looking for her first win in the promotion. McCann was a former Cage Warriors champion but fell to Gillian Robertson in her UFC debut. Overall, she is 7-2 in her MMA career.

Priscila Cachoeira was 8-0 on the regional scene in Brazil before signing with the UFC. Visa issues stopped Cachoeira from making her promotional debut against Lauren Murphy. When that was sorted out, she was the unlucky person to greet Valentina Shevchenko to the flyweight division, losing the one-sided fight by second-round submission.

The flyweights exchanged soon after the fight began, but neither landed effectively. Molly McCann was looking for ducking hooks and caught Priscila Cachoeira with a right hand. McCann landed a jumping back kick and they threw down. Punches were landing for both McCann and Cachoeira, and Cachoeira stuffed a takedown in the meantime. Cachoeira landed a stiff right hand, but McCann kept moving forward. McCann went for a double-leg and got Cachoeira down. The Brazilian stuffed the takedown with a wizzer, leading to a scramble that ended with McCann going for an arm-triangle from bottom. She used it to spin to an armbar that got fairly deep, but no tap occurred. McCann ended up in mount and landed ground-and-pound to end the round.

McCann landed a heavy right hand to kick off the second round. “Meatball” followed up with a spinning backfist that landed cleanly. McCann was simply taking over. Cachoeira did not have anything to offer on the feet and McCann was getting creative with her strikes. There was a heavy exchange at the end of the round, but McCann was up 2-0 quite clearly.

McCann had a different approach to start the final round, taking Cachoeira down quickly. A guillotine attempt led to nothing, and the fight was back on the feet. On the feet, Cachoeira landed a right hand that completely shut the eye of McCann and Cachoeira began pushing forward and overwhelming McCann. McCann was still throwing heavy leather, but not nearly as effective as she was in the first two rounds. McCann landed a haymaker, but Cachoeira answered with a clinch knee. With just under a minute left in the fight, the referee finally stepped in to get the doctor look at the incredibly swollen eye. Surprisingly, the doctor let the fight carry on, and it was a brawl from there. Cachoeira threw a flying knee during the glove touch, causing the referee to give her a talking to. When action resumed, both fighters went for it all. Looping shots from both women came in with McCann waving her opponent forward and flipping her off. To celebrate after the final bell, McCann jumped over the cage to embrace her coaches. 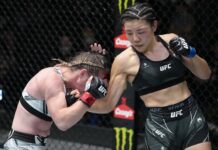