Dan Ige wasted no time pushing his win streak to three, submitting Danny Henry at UFC London in just over a minute.

Dan Ige earned his spot in the promotion with a submission on the Tuesday Night Contender Series. Making his UFC debut with an 8-1 record, Ige fell to Julio Arce. Since then, the Hawaiian scored a first-round knockout followed by a decision victory in December.

Danny Henry is a two-time EFC featherweight champion with an overall MMA record of 12-2. The Scottish featherweight is 2-0 in the UFC so far with a Fight of the Night win over Daniel Teymur and a surprisingly quick submission win against kickboxer Hakeem Dawodu. Of Henry’s 12 victories, he has five knockouts and five submissions.

The fight started with a pair of heavy exchanges with just one shot thrown by each. Ige came in hard with a right hand and rocked Henry. Ige pursued the finish, overwhelming Henry with punches. Henry went to a knee and Ige took advantage by taking the back of Henry, locking in the rear-naked choke, and forcing the tap to get a quick 77-second victory.

Take a look at the power shots that set up the submission. @DynamiteDan808 #UFCLondon pic.twitter.com/8ReMIobSE9

Dan Ige used his post-fight interview to pay respects to the victims of the mass shooting in New Zealand, saying, “We all bleed the same.” 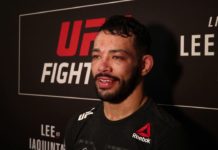 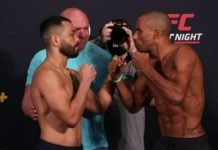