After a successful return against Tim Boetsch at UFC Wichita, Omari Akhmedov is looking to get right back into the thick of things, possibly at UFC St. Petersburg.

Wichita, Kansas — After being out over a year thanks to a knee injury, Omari Akhmedov is looking to get back in action quickly. Picking up a win in his return against Tim Boetsch at UFC Wichita on Saturday, Russia’s Akhmedov said he hopes to fight again, either in St. Petersburgh, Russia or Sunrise, Florida — targeting those dates because after that, Ramadan arrives.

“I’m not injured, so I’m ready to go. I’m up to it,” he told reporters including Cageside Press post-fight on Saturday at the Intrust Bank Arena. “UFC Sunrise [Florida, billed as UFC Fort Lauderdale], UFC St. Petersburg, I’m ready, either or. If the UFC gives me an opponent. But I have to fight [before] May, because then I have the holy month of Ramadan. So I wouldn’t be able to fight. So I’m ready [sooner].”

On his fight against Tim Boetsch, a long time veteran of the promotion, the middleweight said that “I had a long layoff, because of injury. Then I came to the U.S., I’ve been here almost half a year. I wanted to plan for a fight, I didn’t want to take any chances. So I’m real happy with my performance.”

“It went well,” he added. “I thought I was weaker, so I thought I would take [the] speed advantage.”

A turning point in the fight came when Akhmedov seemingly broke Boetsch’s nose. However, the Russian isn’t so sure Boetsch was as hurt as many thought. “I think his nose didn’t bother him a lot. He was coming forward, he was punching, hitting… Tim is known for being a tough opponent.” 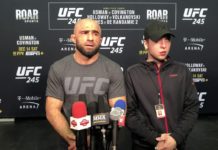 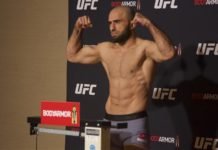 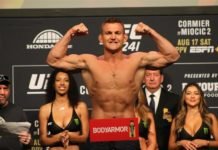