New York, NY — PFL light heavyweights kicked off the very first PPV for the promotion as Omari Akhmedov and Rob Wilkinson met in the cage at the Hulu Theatre inside Madison Square Garden on Friday night at the PFL World Championship.

Akhmedov (24-7-1) came into the fight on a three-fight win streak with two finishes. He hoped to make it 4 wins in a row in order to become a champion and take home a big check.

On the other side was Wilkinson (16-2) looking to for yet another finish in the PFL and change his life with a win over Akhmedov.

Round one began with Wilkinson putting the pressure on Akhmedov, but for the entire round Wilkinson was aggressive and using his reach to land on his opponent. Akhmedov attempted takedowns, but was unsuccessful.

Wilkinson ate a few leg kicks, but nothing too damaging came his way. The round ended with a double knee from Wilkinson.

Round two saw Wilkinson continue his barrage of Akhmedov, landing multiple knees and heavy punches that bloodied him up so bad referee Keith Peterson called for a timeout to get the a nasty cut checked out. The cageside doc deemed Akhmedov good to go, so the fight continued, but it was all Wilkinson.

The round ended with Wilkinson pouring it on Akhmedov, with output so voluminous that it seemingly had Peterson ready to stop the fight.

In between rounds, in fact, the doctor did stop the fight, and Wilkinson is your 2022 PFL World Champion and the winner of the million dollar purse at light heavyweight. He also becomes the first-ever PFL champion from Australia, and is undefeated since being released by the UFC on the back of a two-fight losing streak — with one of those losses to star Israel Adesanya. 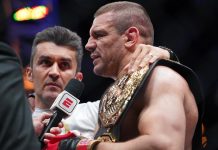