Sarah Frota missed weight and looked massive next to Livia Renta Souza, but it was the former Invicta champ who walked away with her hand raised at UFC Fortaleza.

The big story following the UFC Fortaleza weigh-in was Sarah Frota. The Contender Series Brazil veteran had blown weight by a full seven pounds for her promotional debut. Apparently, no one delivered the memo that the bout was at strawweight, not flyweight. Not a good look, as she stepped into the octagon for the first time against Livia Renata Souza, herself a former Invicta FC strawweight champion.

Souza went right after the lead leg of her opponent as the main card of UFC Fortaleza kicked off. Before long, she had the fight to the ground — and a near-finish. Locking in an arm-bar, it looked like the end was nigh for newcomer Sarah Frota. However, Frota wisely stepped over her opponent to safety. In the scramble that ensured, she made it back to her feet. Souza would look to throw her opponent back to the ground in the final minute, but couldn’t quite convert the attempt. Frota would then jump guard, but with the guillotine nowhere to be found, it was rather pointless, but luckily came late in the round.

Frota opened the second getting her hands going, which led to Souza changing levels and securing a takedown. Her takedown game served her well in the second. At times, Frota would come on strong with her striking — only for Souza to take her down with ease. However, in the final ninety seconds of round two, Frota landed some knees, a heavy left hand, and a combination moments afterward, all of which took their toll. Yet once again, Souza scored an easy takedown to finish out the frame. Which led to a close call, as Souza looked for the submission.

With Souza likely up on the scorecards, Frota was going to need to use her size and power advantage. She came out swinging in the third, but Souza soon had her tied up. Frota pushed her off, but she was slowing. Souza shot in for a takedown, and wound up pulling guard instead. That allowed Frota to sneak in some hammer fists, while Souza switched between an open and closed guard.

A lack of action, however, ended in the ref standing the pair up, giving the edge to Frota at least momentarily. Souza would hang on and survive, and end up taking yet another close split decision on the UFC Fortaleza card. 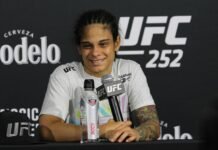 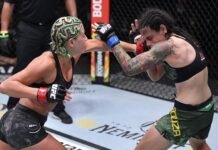