A battle of Brazilian strawweights featured early on the UFC 259 card Saturday. Amanda Lemos was sitting pretty on a two-fight win streak to start the night, while opponent Livia Renata Souza was entering off a win over Ashley Yoder.

“Livinha” Souza, a former Invicta FC champion, was once considered one of the best strawweights in the world. With multiple regional titles, and multiple post-fight bonuses in Invicta, she had entered the UFC in 2018 with a lot of hype — but had yet to live up to her potential.

Lemos stalked her prey patiently through the first two minutes Saturday. Backing Souza up against the fence, Lemos then connected with a heavy blow, a right hand that dropped Souza. Defying all logic, Lemos opted to go to the ground with the dangerous grappler, and nearly gave up her leg as a result. Lemos would eventually break free and wisely move back to center.

Again, Lemos walked Souza down, and again dropped Souza with a punch. A jab no less. A couple of follow-up blows, and the ref had seen enough. He moved in to wave off the fight, giving Amanda Lemos the win. In the process, she became the first fighter to stop the former Invicta champ.

DROPPED WITH A JAB 💥

🇧🇷 Lemos was in control from minute one! 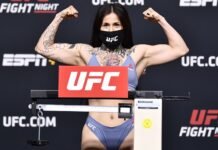