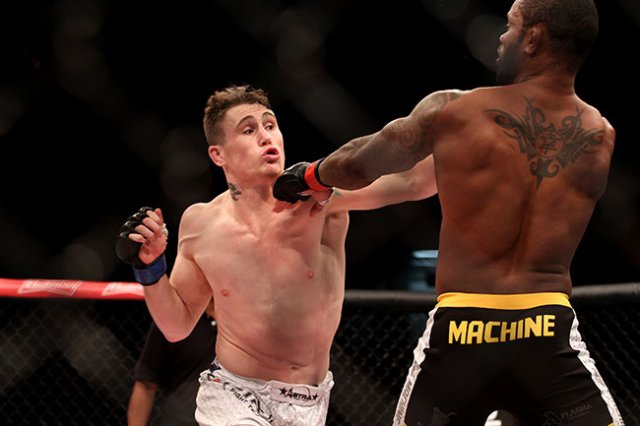 UFC London will feature countryman Darren Till in the main event as he takes on the always scrappy Jorge Masvidal on March 16.

London has not had great luck when it comes to main events recently. Alexander Volkov vs. Fabricio Werdum was thrown into the slot when multiple bouts involving fan-favorite Michael Bisping never came to fruition. Corey Anderson vs. Jimi Manuwa left fans wanting much more when that was announced as the headliner of its event. But now London receives a bout that has implications in the title picture while involving an Englishman. Darren Till comes into the fight ranking third in the welterweight division while Jorge Masvidal is ninth.

Darren Till is coming off his first title shot, but it did not end so well. The Liverpool native was thoroughly dominated by champion Tyron Woodley last September up until a second-round d’arce choke. Many thought Till was rushed into a title shot, as he was just 5-0-1 in the Octagon before facing Woodley. However, he was coming off a (controversial) win over top contender Stephen Thompson, so there was not much space left for him to climb. Till is an impressive 17-1-1 in his career and has a brash personality that signifies a star in the making. His time at 170 pounds is limited though, as he cuts a massive amount of weight to get to the limit, proven by missing weight by over three pounds in the aforementioned fight against Thompson.

Jorge Masvidal was in talks to fight Nick Diaz, but as expected in talks involving either Diaz brother, the fight was never booked. Instead, Masvidal gets a main event appearance on the promotion’s sixth event on ESPN+. “Gamebred” got into title discussions in the welterweight division after going on an impressive three-fight run that included knockouts of Jake Ellenberger and Donald Cerrone. He’s only faced the cream of the crop since then, losing to both Demian Maia and Stephen Thompson.