After a two-year absence, Dominick Cruz will return to face John Lineker at UFC 233 in January.

The UFC continues to stack its first PPV card of 2019. On Wednesday, the Orange County Register was first to report that former bantamweight king Dominick Cruz would once again step back in the octagon. Meeting him in his return to action will be the always formidable John Lineker. The bout, taking place at UFC 233, is all but certain to feature prominently on the PPV portion of the event.

Cruz, as he has been frequently throughout his career, has been on the sidelines due to injury. He’ll be fighting for the first time in two years when he throws down with Lineker. His last bout, at UFC 207, saw him lose the bantamweight championship in a shocking upset against Cody Garbrandt. The fight was stunning not just because of Garbrandt’s win, but because of how thoroughly he outclassed Cruz that night. To many, ‘The Dominator’ was, to that point, nearly untouchable.

The loss was just the second of Cruz’s career. At 22–2, his only other defeat came under the WEC banner, against Urijah Faber. Cruz would go on to avenge that loss, beating Faber twice in the UFC. Both times, the 135lb title was on the line.

In fact, Cruz never lost the title in his first UFC title stint, but was instead forced to vacate the belt due to extended layoffs. He’s fought just four times since 2011, winning the title back in 2016 against T.J. Dillashaw, defending against Faber, then losing it against Garbrandt. ACL issues, and more recently a broken arm, have plagued his career.

Against Lineker (31-8), he gets a heavy-handed slugger who has won his last two fights. After struggling to make the flyweight limit, Lineker has found renewed success as a bantamweight, after returning to the weight class in 2015. Lineker has lost only to T.J. Dillashaw (in a non-title fight) since heading back to 135lbs. 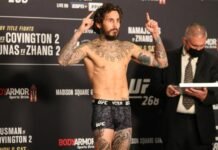