The second fight in at UFC Beijing on Saturday, held at the Cadillac Arena in Beijing, China, saw Song Yadong return to action against fellow bantamweight Vince Morales. Yadong was perfect in his first two UFC bouts to date, and was looking to build off that. Morales, meanwhile, was hoping to play spoiler in his UFC debut, after losing on the Contender Series but bouncing back with a win at Bellator 205.

Starting off, the pair were in a standoff, with just one punch landing through the first minute. Yadong backed Morales up against the fence; they’d move back to center and exchange. Yadong then fired a spinning back kick to the midsection. Morales fought back, firing off a combo and a couple of leg kicks. The back and forth continued, with Yadong controlling the octagon, looking to land his right hand. Spinning attacks followed; a back fist was punctuated with a right hook. Morales was feinting with his jab, trying to catch Yadong, but it was Yadong finishing the round strong with a spinning head kick.

Song Yadong landed a kick to the body early in the second, while Morales returned fire with a right, then a left hook. The two settled in for a bit, looking to pick their spot. Morales circled out of danger at times, generally when Yadong attacked with his spinning kicks. A spinning back fist landed for Yadong. Morales walked forward with a combo, forcing Yadong to cover up briefly. Morales would land a right in an exchange, eating a leg kick in the process. Yet Yadong continued to dazzle, with every other attack seemingly a spinning assault. Plenty of flash and flair, while Morales tried to counter with a more traditional approach.

Round three saw a change in approach from Yadong, who took the fight down early and worked into position for an arm-triangle choke. He was working to step over, but Morales scrambled free. Back on the feet, they exchanged, and were trading back and forth til the end of the frame. Morales turned it up late, but Yadong had cruised to a decision victory in style. 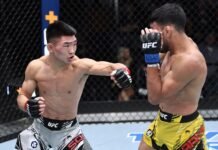 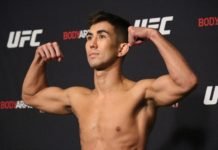 UFC: Ben Askren Willing to Get Back in USADA Pool, Offers to Fight Nate...