Floyd Mayweather Jr. to RIZIN FF? That’s one apparently no one saw coming. The undefeated boxing legend, last seen earning a 10th round TKO of UFC star Conor McGregor, has signed on to face Japanese kickboxing sensation Tenshin Nasukawa at RIZIN 14. While no rule set has been announced, it’s unlikely to be full blown MMA rules. While RIZIN is best known as an MMA promotion, it has dabbled in kickboxing and other, modified rule sets over the years.

Mayweather (50-0 boxing) said of his opponent that “I think that he’s young, very strong, very fast, and he’s undefeated. So it’s obvious he’s been doing something right to be where he’s at, so I’m proud of him.”

Talking about the fight in general, Mayweather later said that “I’m pretty sure he’s going to bring a lot of excitement, I’m going to bring a lot of excitement, and that’s really what the people want to see.” As far as his motivation for taking a bout in Japan, “it’s always been a goal of mine to go outside the U.S.,” Mayweather said, “and go into another arena and display my talent. As a professional, because I did it as an amateur, but now it’s different, as a professional. So it’s great. I want to say congratulations to Tenshin, and RIZIN, and just everybody for backing this event.”

“In terms of the rule set and the weight rules, we still have some work cut out for us,” RIZIN President Noboyuki Sakakibara later stated via translator. “We’ll get that situated in the next couple weeks,” Mayweather added a short time later. 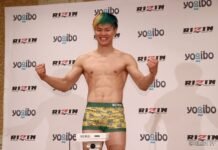 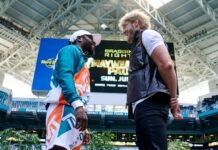