The UFC will be back in New York City before long, as the promotion revealed it’s Q1 2019 schedule on Saturday night.

The UFC has unveiled its schedule for the first quarter of 2019, as promised. Just a week after David Shaw, Senior Vice President of International and Content, suggested the schedule would be available soon, the promotion has released dates up to the end of March.

2019, of course, will see the UFC leave longtime broadcast partner FOX, and embark on a journey with ESPN. The promotion has long coveted the legitimacy the sports leader can bring, but it will be interesting to see how fans react to so many shows being broadcast via the network’s streaming service, ESPN+.

Coming off Saturday’s return to New York with UFC 230, it won’t be long before the promotion returns to the area, with the first card of the year coming in Brooklyn on January 19. A previously revealed date in Anaheim follows. That would be UFC 233, which will see the organization go head-to-head with rival Bellator. The Viacom-backed number two MMA promotion hosts a show that same night just down the road at The Forum in Inglewood, CA.

While UFC 234 has not been given a location, it’s possible the promotion could return to Australia with that card.

The breakdown looks as follows:

Locations and venues for multiple dates have yet to be announced. Interesting in particular are the five events in March, making that a very busy month for the promotion. 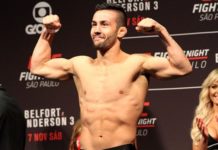 Pedro Munhoz Hit with $2,500 Fine for Post-Fight Celebration at UFC 235 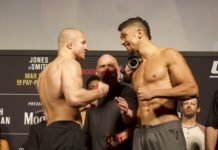 Johnny Walker Expected to be out Four Weeks with Shoulder Injury, Eyeing Alexander Gustafsson in Return