KSW 45 took place at the SSE Arena at Wembley on Saturday in London, England. There, in front of thousands of supporters from his home country, KSW heavyweight champion Phil De Fries went to war with former champ and Polish standout Karol Bedorf. On a night filled with some big finishes on the feet, De Fries bucked the trend, executing the only submission stoppage on the card.

De Fries, a former UFC heavyweight, had won three straight, including a victory over Michał Andryszak at KSW 43 to capture the promotion’s heavyweight crown. Bedorf, meanwhile, was back in action for the second time in 2018 after missing all of 2017 with injury issues. At 9-1 in his past ten fights heading into KSW 45, he was a real threat to De Fries’ reign.

Still, the thirty-two year old from Sunderland, England got the job done. The key was getting the fight to the ground, and top control. That started in round number one, but in the second is where things came to a head. A strong single leg takedown saw De Fries put Bedorf on his back. Crucially, during the takedown, he managed to position the challenger away from the cage, preventing any chance of escape.

From there, De Fries worked within Bedorf’s guard. The Polish fighter was a clear submission threat, and had worked for a kimura off his back at various points. Yet De Fries methodically passed to half-guard, and eventually, as able to launch his own attack on his opponent’s arm. Locking in an Americana, the arm hyper-extended, he forced the tap. With the submission, De Fries became just the second man to submit Bedorf. The first? Current UFC heavyweight standout Alexey Oleynik.

With his first title defense a success, De Fries could be sticking around KSW for a while. Things didn’t go so well, however, for Polish Olympian Damian Janikowski. An undefeated 3-0 to start the night, he ran into the much more experienced Michal Materla. Though a spirited effort on both fighter’s part, Materla proved too much for the prospect. He managed to catch Janikowski with some thunderous punches a couple of times, and ultimately took Bronze medalist’s back before unleashing a barrage of heavy blows for the TKO.

The bout was part of the opening round of KSW’s welterweight tournament.

Looking for results from KSW 45? Look no further: the results are here! 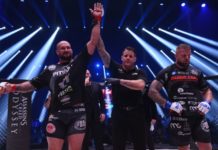