Gegard Mousasi defended his middleweight title against welterweight champ Rory MacDonald at Bellator 206 on Saturday, perhaps underscoring the importance of weight classes in the process.

It seems to be the theme of 2018: champion vs. champion fights. Daniel Cormier vs. Stipe Miocic. Martin Nguyen vs. Bibiano Fernandes. Amanda Nunes vs. Cris Cyborg. Angela Lee vs. Xiong Jing Nan. Throw in Khabib Nurmagomedov vs. Conor McGregor if you wish. And at Bellator 206, it was Rory MacDonald vs. Gegard Mousasi.

Mousasi never got his shot at gold in the UFC, though he deserved one, leaving the company on an impressive win streak and continuing his winning ways in Bellator. MacDonald had his, but never made it back to a second shot at gold. Still, he won Bellator’s welterweight title in a hard-fought contest against Douglas Lima, and holds a win over current UFC 170lb champ Tyron Woodley.

Thus, there was an argument to be made that Mousasi and MacDonald were the best in the world in their respective weight classes.

Facing off in the cage after the opening bell at Bellator 206, both men stood their ground. MacDonald threw an overhand, Mousasi a leg kick. MacDonald, perhaps more so than expected, looked the much smaller man in the cage. Mousasi landed a straight right, and MacDonald began focusing on his movement. He’d throw out a leg kick. Mousasi answered that with his own. MacDonald then fired off a crisp right hook that came out of nowhere. A Mousasi high kick was blocked, while MacDonald went high with his own kick. Mousasi then connected with a straight right again. MacDonald would finish the round by connecting with a push kick, but it was Mousasi who cleared had the edge.

Round two saw MacDonald attempt a rolling takedown, something he’d tried against Wonderboy Thompson in Ottawa years earlier. A key mistake, as it allowed Mousasi to get the upper hand and move into MacDonald’s guard. Mousasi battered a bloodied MacDonald with ground and pound, and with two minutes remaining, the middleweight champ passed to full mount. Elbow after elbow rained down on the ‘Red King’ whose face had come to match his nickname. Trapped, MacDonald could only cover up and take more punishment, resulting in Herb Dean calling off the affair.

Afterward, Mousasi told Big John he expected to face Rafael Lovato Jr. next. The undefeated BJJ ace should make an interesting challenger. After that, the champ said he was open to facing Lyoto Machida — with plenty of drug testing. 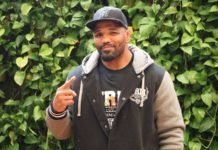 Who is Next for Jake Paul Following His Win Over Tyron Woodley?