The cast of The Ultimate Fighter 28 has been unveiled, and there’s a big question about the roster that was expected to bolster the featherweight division.

The cast for the 28th, and possibly final, season of The Ultimate Fighter has been announced and there is question about several of the female participants.  For a season that was expected to finally bolster the women’s featherweight division, many are shocked that the cast has several fighters who typically fight at bantamweight.

As it stands, several members of the roster are stand-out bantamweights such as Katharina Lehner, Pannie Kianzad, and Larissa Pacheco.  The move is perplexing as there has only been one non-title bout in the women’s featherweight division in the year and a half it has been open in the UFC.  Furthermore, several of the women who have fought for the title are considered to be natural bantamweights.  With increasing comments from featherweight champion and pound-for-pound stalwart Cris “Cyborg” Justino about leaving the UFC, there was question if she was feeling frustrated with the failure to sign new genuine featherweight talent to the promotion.  The announcement of The Ultimate Fighter featuring female featherweights was supposed to be a sign of change, but the unveiling of the roster has only fueled questions about the level of investment long-term in the weight-class.

It should be noted, the show has featured plenty of fighters who moved weight-classes as soon as the show concluded.  There is also the casting factor, as fighters may be chosen for how producers feel they will entertain on television and not solely on their skills or record.

The heavyweight roster features several up-and-coming fighters with varying records that range between four to twelve fights.  However, the stand-out record is held by Przemyslaw Mysiala, who enters the show at 22-9-1. He will enter the house with the most professional experience of anyone on the show, with previous fights in Bellator and ACB.

One coach will be middleweight champion Robert Whittaker, a TUF alumni who won the international season of The Ultimate Fighter: The Smashes as a member of the Australian team coached by George Sotiropolous in 2012.  Opposing him will be middleweight contender Kelvin Gastelum won season won Season 17 as a member of Chael Sonnen’s team in 2013.  Gastelum notably was the last fighter picked on his season and upset arguably the most hyped prospect in the history of the show in Uriah Hall to win the final.  Both men will fight at the conclusion of the season with Gastelum challenging Whittaker for the middleweight title.

The show could be the last season of the long-running series as the UFC will move to a new broadcast partner in ESPN in 2019.  It is still unclear if the network is invested in the program compared to other content such as Dana White’s Tuesday Night Contender Series.  It is unclear if the UFC may choose to air the show exclusively on their Fight Pass app if ESPN chooses not to pick it up as part of their programming.  The Ultimate Fighter has aired since 2005 and is credited with helping to save the sport at a time when MMA and its athletes were not understood.

The 28th season of The Ultimate Fighter is set to air later this Fall.

The full cast is listed below: 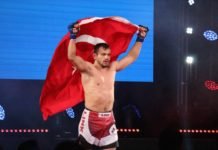