You can consider Chris De La Rocha’s return at UFC 225 a last stand scenario. Just don’t expect him to approach his fight with Rashad Coulter any differently.

UFC 225 heavyweight Chris De La Rocha knows his back is against the wall heading into his bout against Rashad Coulter in Chicago. 0-2 in the UFC is not where you want to be as a fighter, even at heavyweight, where talented big men are relatively scarce. Yet you can forget about De La Rocha playing it safe come Saturday. The 39-year old, who is 4-2 in an MMA career that started relatively late, is not about to change his ways. This despite returning after two years away thanks to injury, and with the possibility that UFC 225 could be his final appearance in the promotion, and potentially his career.

De La Rocha is getting the opportunity to open up the televised card, taking precedence over names like Sergio Pettis, Clay Guida, and Rashad Evans. That’s an important slot, as it could set the tone for the rest of the night, at least with fans lacking UFC Fight Pass. For De La Rocha, it’s more than just a statement on how popular the heavyweights are with fans, though that plays a role. It’s also, he told us, “a statement on both my performances and Rashad [Coulter]’s performances. We’re both heavyweights that are going to come out and push the action. We don’t wait. We’re not afraid to mix it up.”

And despite the long layoff, he’s not overly worried about the time away. “A little bit,” he conceded. However, “I’m not too concerned. I’ve been staying in pretty good shape, I’ve been sparring and doing all that, trying to get ready for this, for an opportunity.”

As to what kept him out of action so long, De La Rocha explained that “I ruptured my biceps tendon. I ended up having to have surgery, having it repaired.” After that, “I had some complications, just a little under a year after where my arm locked up again, and I had to work through that and get it back where I had my full range of motion.” Still, the heavyweight has been staying active, staying in the gym every day, sparring and honing his skills.

“I’m not one of those guys that just kind of trains when I’m having a fight,” he said. “I train all the time.”

The setback came at a horrible time, as the UFC was in the process of putting together a fight for De La Rocha back in 2016 when he suffered the bicep injury. He’d thrown a left hook in training, and pop. Just like that, months and months on the shelf, physiotherapy, and the aforementioned surgery.

“Life’s short, and anything can happen. So reach for your dreams, and what you want to do.”

Still, it’s in the past, and De La Rocha is back in the game. On what he’s expecting from the fight and opponent Rashad Coulter, he told us that “I think he’s going to come out and try to size up that one big punch, and try and catch me. Thinking, the ring rust, that my reaction times are going to be a little slow and off.”

One thing the fighter is sure of is that “we’re both hard headed. We’ll both keep coming forward.” In the end, “I foresee a really good show. I definitely don’t see this going to a decision.”

At 39, De La Rocha knows this could be his final run in the sport. While he got a late start, around 30, he’s not exactly carrying any regrets. “I’ve been training, whether it’s been Brazilian jiu-jitsu or wrestling, since the age of 13,” he told us. “My professor in jiu-jitsu was fighting MMA back in 2002, 2003. I was helping him get ready for his local MMA fights here in the Pacific North West, and I started gaining an interest in MMA. But I ended up injuring my back, and I had to have a discectomy, I’d herniated a disc in my back.”

That injury was an awakening. “I realized life’s short, and anything can happen,” he explained. “So reach for your dreams, and what you want to do. So I wrote down some goals for myself, and I just started plugging away.”

Taking his own advice, he went further than I expected. “To my surprise, I wound up in the UFC. My original goal was to just have one MMA fight, to see how I did.”

The heavyweight has accomplished a lot in a short time, but he remains realistic about his prospects. When asked if this could be his last battle, he admitted that “it’s the twilight of my career, I understand that.” That said, “I have some other goals that I’m working on.” Which means that his MMA career is “something that I’m going to take on a day by day basis.”

If things go well at UFC 225, he might consider just seeing how far he can take things, mind you. After all, heavyweights often have a longer shelf life than the other weight classes. “It all depends,” De La Rocha said. “I’m in the process of trying to become a firefighter.”

“This is a last stand type of thing. My mindset going in though, it feels like every other fight.”

He’s enrolled in school at the moment, and if a firefighting job came up, “it would probably mean the end of my MMA career.” De La Rocha is no stranger to high pressure jobs; aside from fighting, he also spent ten years as an officer for the Department of Corrections.

“I tend to strive when I’m put under more pressure, or when I have more things going on,” he said of juggling professions. “My wife and I say, when we’re sitting around the house doing nothing, that’s not normal to us. I like the, not the stress, but the challenge of juggling things and managing them. It keeps me focused, and I think I put out my best work when I’m under pressure.”

As for the pressure of getting back in the cage, Chris De La Rocha admits that “this is a last stand type of thing.” But “my mindset going in though, it feels like every other fight. I’m going in, I’m going to do what I want to do, and impose my will on my opponent.”

“I’m not going to try to force the action,” he continued. “I think that was one of my biggest flaws in my fight against Milstead. I tried to force it too much. That exposed me to getting hit too often.” Instead, he’ll push the pace, but within reason.

As for the UFC 225 experience overall, De La Rocha said that “I’m looking forward to meeting Andre Arlovski. He was one of my first favorites back in the day when I first started watching UFC. It’s going to be pretty cool.” 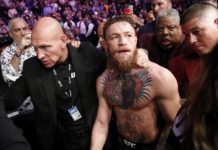 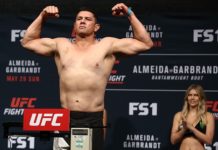 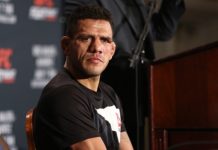