Despite recently losing a shot at an interim 170lb title, former lightweight champ Rafael dos Anjos, or RDA if you prefer, predicts he’ll be welterweight champ within a year.

Former UFC Lightweight Champion Rafael dos Anjos was forced to jump up to the welterweight division after he felt rough weight cuts affected his performance against both Eddie Alvarez and Tony Ferguson at 155 pounds. Things looked promising for his first three fights, as he defeated Tarec Saffiedine, Neil Magny, and then outclassed Robbie Lawler — all at 170 pounds.

Then on Saturday, at UFC 225 dos Anjos suffered a setback in his quest for the welterweight title when he was defeated by Colby Covington for the Interim UFC Welterweight Championship in Chicago via unanimous decision.

Rafael dos Anjos has now said on Instagram that he believes he’ll be champion within the next year and that a loss to Covington won’t keep him from his ultimate goals at welterweight, just like a loss to Khabib Nurmagomedov didn’t keep him from winning the UFC Lightweight Championship 11 months later.

The former champ wrote that

I want to thank you all for the messages and the support. I am a very competitive guy and I confess I never know how to handle defeat. I did my best inside the octagon, I had the support of the best coaches in the world. The result was not mine, but nothing will make me give up. I am a challenge driven guy and this is just another one in my way. In 2014, after the fight against Khabib, I worked very hard, and with God’s blessing, 11 months later I became the Lightweight champion. This time it won’t be any different. I got the chance to fight for the interim belt after only three fights in the welterweight division. My path in this weight class has just started. I know what I am capable of, I know what I can achieve. I won’t give up my dreams because of the first obstacle in this division. Now it’s time to see what did not work, improve, and get back to my path to the top. God knows everything. Bad guys win sometimes in real life, but at the end, the good guys always win. You can lose the battle, but never the war. Thank God I have the best friends and family I could ask for. I’ll be back soon stronger than ever. You’ll see!”

Whether or not RDA’s prediction proves true remains to be seen. That said, it appears the former 155lb’er is far from done in the welterweight division. 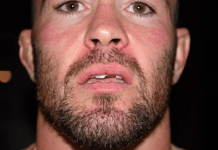