Tai Tuivasa is an new exciting contender in the heavyweight division, but he faces former champion and longtime veteran Andrei Arlovski on the pay-per-view portion of UFC 225.

Tai Tuivasa was only 12 years old when Andrei Arlovski first won the UFC heavyweight championship in 2005.  “Bam Bam” wouldn’t even enter the cage as a professional until 2012 while “The Pitbull” would be in the midst of a career that is approaching twenty years long.  When they collide on Saturday, it will be the definition of a generational battle in the heavyweight division.

Andrei Arlovski stands as arguably the most seasoned veteran in the UFC.  His career began in 1999, and since then he’s faced a who’s who of the weight class.  His resume contains names likes Stipe Miocic, Fedor Emelianenko, Frank Mir, Alistair Overeem, and countless others.  But time now competes against “The Pitbull” as much as the heavyweight division.  At 39 years old, he has already had one late career resurgence and there is serious question as to whether he should walk away from competition now, before he reaches a decline from which there is no return.

In 2011, Arlovski dropped four fights in a row with three coming by first round knockout.  After a 12 year career at the time, the talk was loud that his chin was done, that his best days were behind him and that he would only get hurt against young and hungry competition.  Instead, he would go on an impressive streak of 10-1-1 including a six fight win-streak that put him on the cusp of title contention.  That streak ended in 2016 where Arlovski lost five straight.  Currently, he is riding back-to-back wins over lesser competition in Junior Albini and Stefan Struve.  But, the 25 year old Tuivasa is a different animal entirely, and a loss for Arlovski would raise question if continuing his career is in his best interest.

Tai Tuivasa debuted in the UFC late in 2017, but already carries the kind of authentic buzz that all fighters seek to propel their career.  His career record is 7-0, but the real interest around him is the fact that all his victories have come via first round stoppage.  If his abilities in the cage still carry questions, then his reputation in the gym gives him validation.  Even at his young age, he is the longtime sparring partner for UFC veteran and knockout artist Mark Hunt.  If that’s not enough, his appearance at UFC 225 is expected to be a huge night for Australian MMA.  With champion Robert Whittaker competing in the main event and featherweight contender Megan Anderson making her UFC debut, Tuivasa has the perfect stage for a break-out performance for not only himself but his home country.

“Bam Bam” doesn’t shy away from the spotlight (Shoey anyone?) and is already turning heads towards his career.  The UFC has taken notice, signing him to a new four-fight contract that begins with Arlovski.  He also arrives at an interesting time in the heavyweight division.  Stipe Miocic is conceivably a year from a sweep of the division’s elite.  By process of elimination, Tuivasa could be close to title contention in that time if he continues at his current pace.

Stylistically, Arlovski must find a way to neutralize the explosiveness of Tuivasa.  He should look to keep the Australian against the fence and wear him down in the clinch.  In his last fight, Arlovski completed four takedowns, surpassing the combined total (3) for his entire career.  This could work against him as Tuivasa will not be surprised should Arlovski look to change levels and get the fight to the mat.

For Tuivasa, he should look to be patient and find his openings.  He figures to be the bigger man in the cage and should look to keep the fight in middle of the cage.  From there, he needs only to wait for his openings to explode with his signature combinations.  Most imperatively, he must wait until Arlovski is flat footed as to not get countered with a takedown coming in.

A victory for Arlovski could be the perfect career finale should he choose to take it.  Or at the very least, fuel the final pages of his career as he approaches 40 years old.  Tuivasa would break into the top ten where his style would make for exciting match-ups with contenders such as Derrick Lewis, Curtis Blaydes, or Junior dos Santos.  Neither man intends to take a step back as the two collide in the only heavyweight contest on the UFC 225 pay-per-view. 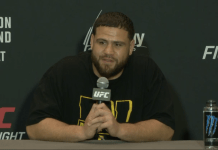