With a strong second half, there were a handful of cards to choose from for Event of the Year 2018, but in the end, one show stood out above the rest.

MMA 2018 was notable perhaps more so for what what it lacked rather than what it had. Through the first half of the year, there was a real deficit in major events. The big players all seemed hurt or inactive. Bellator launched its heavyweight grand prix, but spread out across a twelve-month span, there was no single event that stole the show in the first half. UFC events seemed to pass by with a yawn.

Then came the second half. The return of Conor McGregor at UFC 229. The 25th anniversary card in Denver. Bellator stormed Hawaii with back-to-back shows. ONE put on Heart of the Lion. UFC 231 in Toronto served up two entertaining title fights.

In the end, one event stood out. Care to guess which?

Heath Harshman: This was the hardest decision to make, without a true stand-out event taking place in 2018. There were plenty of solid cards, but nothing like a UFC 205, UFC 217, or UFC 218. But at the beginning of 2018, a few great events took place. A couple of events main evented by Jeremy Stephens were near the top of my list, UFC St. Louis and UFC Orlando. But, UFC 220 was the best event of the year. Featuring the prequel to Cormier-Miocic in the summer, with both champs defending their belts in decisive fashion, Boston’s PPV was fantastic. There’s was plenty of other stuff to enjoy, too. An awesome Fight of the Night between Calvin Kattar and Shane Burgos nearly stole the show, while Rob Font knocked out Thomas Almeida with a head-kick.

Jay Anderson: While a lot of folks will focus on the UFC, there’s a very strong argument to be made that Bellator had the event (make that events) of the year when they headed to Hawaii in mid-December. Scott Coker’s promotion did what the UFC has failed to do: bring a major MMA show to the Hawaiian islands. Both companies have popular Hawaiian champions, but just as the UFC failed to bring Joanna Jedrzejczyk to Poland and Conor McGregor to Ireland (when he had his belts), they failed to take Max Holloway home, at least thus far. Bellator did not make the same mistake, putting Ilima-Lei Macfarlane atop Bellator 213, where she came through with the biggest win of her career against Valerie Letourneau. Beyond that, Lyoto Machida made his debut, Neiman Gracie secured a title shot against Rory MacDonald, King Mo was knocked out by Liam McGeary, and a night earlier, Michael Chandler reclaimed lightweight gold just after Frank Mir tapped to strikes against Javy Ayala.

Josh Evanoff: UFC 229 was a giant event that would end up being the largest in the sports history. Selling 2.4 million PPV’s in the process, we saw Conor McGregor’s unsuccessful return to the octagon against Khabib. Khabib dominated and although there was controversy after the fight, it only added on to making the event bigger as the news of the brawl was everywhere. There was also Dominick Reyes’s coming out party, Derrick Lewis’s comeback, and an amazing fight between Anthony Pettis and Tony Ferguson.

Jesse Gillette: UFC 229: Khabib vs. McGregor is my pick for event of the year. We were treated to Derrick Lewis’ comeback KO against Alexander Volkov, a classic between Tony Ferguson and Anthony Pettis, and also the madness that was Khabib Nurmagomedov vs. Conor McGregor + the aftermath. Viewers were intrigued from the start of the PPV to its climax and beyond… as we also got to witness Khabib Eagle himself over the cage to stomp out Dillon Danis, while McGregor instigated a group of thugs from Dagestan and started his own drama inside the cage. We’re still feeling the effects of that one.

Eddie Law: An improbable comeback by one of MMA’s most entertaining personalities when The Black Beast came back with a massive KO win in the last seconds of the fight, two high-level lightweight former champs putting together a ridiculously bloody fight, and the main event that was completely dwarfed by the chaos that followed it. UFC 229 was the craziest event and THE event of the year.

Paarth Pande: UFC 229. Any event that has a McGregor fight on is exciting. The buildup, the fight card, and the main event everything was awesome. Starting from Lewis’s hot balls comment, to Aspen Ladd’s knockout to the crazy Pettis vs Tony fight. The undercard delivered. Plus McGregor vs Khabib was fun. Khabib effectively shut McGregor down and the post-fight brawl was even more exciting.

Farzin Vousoughian: UFC 229. It had everything. The comedy from Derrick Lewis, the brawl from Anthony Pettis and return of Tony Ferguson, and of course, the highly anticipated fight between Khabib and Conor, plus the aftermath. The UFC did not like it, but let’s be honest, it had a lot of eyes and everyone was talking about it for days.

Mike McClory: I’m going with UFC 229 but not because of Conor and Khabib. This was very entertaining card that saw finishes from the opening bout until the very end. The only real negative of this card was the melee that kicked off after Khabib and Conor’s main event, but for some that might be reason enough to watch.

Dan Doherty: UFC 229. With the most pay-per-view buys of all-time by a longshot at 2.24 million, this was likely many people’s first time watching an event, and boy did it deliver. It started with Michelle Waterson showing her skills, then we had an incredible comeback by Derrick Lewis, leading to the greatest post-fight interview of all-time. Dominick Reyes proved to be one of the top talents at 205, then there was a Fight of the Year candidate between Tony Ferguson and Anthony Pettis in the co-main event. It all culminated with a matchup years in the making between Khabib Nurmagomedov and Conor McGregor. Khabib wiped the floor with the Irish superstar, then all hell broke loose with a post-fight brawl. Of course, that left a black eye on things, but finally being able to see those two battle and the preceding great fights/performances make UFC 229 the event of the year.

Gabriel Gonzalez: UFC 226. Now this one was tough. 223 in Brooklyn easily had the craziest week. 229 for Khabib vs McGregor was the biggest card. BUT, on fight night the card that delivered to me was 226 with the champ vs champ fight. History, upsets, and great performances throughout. Only one blemish, and that was Ngannou vs Lewis which will live in infamy.

The end result: With no other event getting more than a single vote, UFC 229 was the Event of the Year 2018! 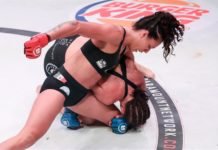 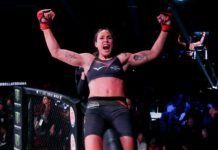 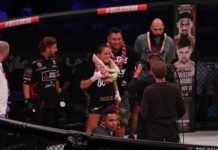