Fighting for 14 different promotions with 43 bouts under his belt, Bobby Voelker remains active as a fighter, but also as an MMA referee. In fact, being an MMA official has helped him as a fighter.

There is a never a shortage of complaints from MMA fans on officiating. Whether a stoppage comes early, late, or a referee makes a simple mistake, MMA fans become heavily critical of the official.

“I kind of know what fighters are going to do before they do it.” – Bobby Voelker, on the advantages of being a ref and fighter

There is no perfect solution to these mishaps. Yet perhaps one logical idea is to have fighters serve as refs. That is exactly what one current fighter is doing.

Shamrock FC welterweight Bobby Voelker can be seen in some regional MMA events in the Midwest as the third member inside the cage. In addition to helping eliminate bad officiating as a fighter, Voelker told us that being an official helps him as a fighter.

“I start to see things quicker,” Voelker said. “I don’t know if it’s from fighting that I see it, or from reffing. I see so many fights that I am able to just see things quicker. I kind of know what fighters are going to do before they do it.

“It’s also helped in fights as well that I notice ‘my opponent it is about to do this, so I better do this or move this way.’ I’m able to tell the future in a way.”

Voelker, a former UFC and Strikeforce veteran, joined Shamrock FC, a Missouri based MMA promotion, in 2014. With a 6-1 record, Voelker has fought in his hometown of Kansas City each match. While fighting in his hometown, he became interested in being a referee.

“At first I was a little worried because I am in charge of these guys since I have to keep them safe,” Voelker said. “But I got in the zone, just like I do when I fight or do any other activities. I’m focused on the rules, what they can and can’t do. I try to stay out of their way. But if they are doing something they are not allowed to, I’ll have to warn them or take points.”

As a former fighter, Voelker, nicknamed “Vicious,” knows how important safety is for the sport. But he feels most referees do a good job at what they do, and do not allow athletes to suffer undue harm.

“It’s a pretty safe sport.” He said. “I know people think it is dangerous. But it is safe.” 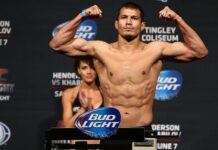