Bobby Voelker will make his Bellator debut on October 29 against fellow UFC vet Sabah Homasi at Bellator 250. Ahead of the fight, Voelker revealed that he signed with the promotion last year before COVID-19 hit.

“[I signed] right after I got that Shamrock FC belt, I believe it was April 7, so a year and a half ago,” Voelker told Cageside Press. “And then I was supposed to fight … a year ago in November and kind of dislocated my shoulder. So that kind of put me out of that one. And then I was kind of hoping for May, but then with the whole COVID stuff going on, it didn’t happen then either. So now it’s time. I signed a four-fight contract.”

Voelker (33-13) defeated Cameron VanCamp by unanimous decision at Shamrock FC 317, which pushed his winning streak to four-straight. The 41-year-old has gone 9-1 since he was released from the UFC in 2014 and finished six of his opponents during that span.

“Vicious” is perhaps best known for his exciting fights in Strikeforce against Roger Bowling and feels with Scott Coker at the helm with Bellator, this promotion has a bit of a throwback vibe to it.

“I love Strikeforce. I mean, those are some great memories there,” Voelker said. “It’s good to go back here and see a lot of the old guys that work there and everything. So that’ll be a little bit of history back in play. So it’ll be nice.”

Homasi (14-8) was released from the UFC in 2018 and carries a three-fight win streak into this welterweight contest. The 32-year-old is coming off a unanimous decision victory over Curtis Millender at Bellator 243 in March.

Voelker loves the style matchup and is hoping to earn his first knockout victory since December 2018.

“I want my knockout,” Voelker explained. “It’s been too long since I’ve been able to put my hands on people’s faces this last year and a half. And I know that’s what my opponent definitely wants to do to me. He’s a quick little fireplug power puncher and he’s training with all the right people. So he’s coming in with lots of confidence, lots of heart, lots of skill. I just want to take it away from him.” 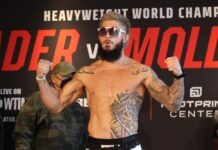 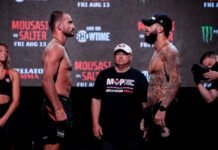