Craig White was game, but ultimately Neil Magny was able to get the job done within a round at UFC Liverpool on Sunday.

After his originally scheduled opponent Gunnar Nelson was forced off the UFC Liverpool card, Neil Magny sat in wait of a replacement opponent. And waited. And waited. Just when it looked like Magny might be off the card, the UFC recruited Cage Warriors veteran Craig White to step in. ‘Thundercat’ would enter the fight against Magny on a four fight win streak, but the bout would be a huge step up for the English fighter. On the bright side, he was fighting in his native England where the hometown crowd would be heavily in his favor.

The newcomer, White, pressed Magny up against the fence early, and looked to connect with some knees up high. With the pair seemingly evenly matched, Magny tried to reverse, only to knee White below the belt on the turn. That led to a brief pause; back underway, they clinched again. As the fight got to the ground, it was Magny on top, with Craig looking for an arm-triangle. Upkicks followed, and Magny would finally back off and allow the ref to stand Craig White back up.

White then charged in, initiating the clinch against the cage. Magny landed a knee to the body, then a knee to the face that dropped White! Magny unleashed punch after punch on the downed White. White seemed like he recovered briefly, but a second barrage of ground and pound put him out.

After the bout, Magny called out another recent welterweight winner, Kamaru Usman. More importantly, Magny showed incredible heart by donating a portion of his purse to a sick child. 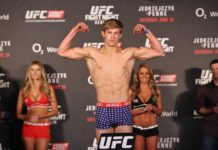