We spoke to Bellator featherweight contender Emmanuel Sanchez who is ready for a title shot after his huge win against Sam Sicilia.

You’d be hard-pressed to find another fighter on the Bellator roster who has compiled the resume of one ‘El Matador’ Emmanuel Sanchez. Since signing with the Viacom-owned promotion just about four years ago, the Roufusport-trained fighter has gone on a tear, winning nine out of his 11 Bellator fights, dropping only a close split decision loss to Daniel Weichel and a unanimous decision to former two-time division champ Pat Curran.

With his impressive first-round submission victory over Sam Sicilia at Bellator 198, Sanchez has positioned himself as the number one contender to Patricio Pitbull’s featherweight strap.

Speaking with Cageside Press last week, Sanchez said he has not been promised anything in the way of a title shot. “[Bellator] hasn’t guaranteed me anything,” Sanchez told Cageside Press. “It’s the fight game, nothing is 100%. But I was told to stay ready in case one of those guys get hurt.”

Sanchez is referring to the main event of Bellator 203 later this year in Rome, Italy, when the aforementioned featherweight champ Pitbull defends his strap against the last man to beat Sanchez, Daniel Weichel. “I honestly hope I don’t have to jump in on short notice and save this card,” Sanchez revealed. “I hope those guys get to settle their beef, really I do.

Sanchez may want Pitbull & Weichel to settle their score, but he admits taking the belt from Weichel would be sweet. “If [Weichel] does beat Pitbull and win the belt, hell yeah it would be sweeter,” Sanchez said emphatically.

“I beat his ass, just go back and watch the fight. I’m not making excuses, I’ve lost before, it is what it is. But I beat that guy, and if he does win the belt from Pitbull, he won’t have it for long because ill beat his ass again and take the belt. It’s time for a new king in Bellator’s featherweight division.”

A changing of the guard perhaps. The 27-year-old Rufusport product hasn’t even entered his prime, however, and people are starting to realize ‘El Matador’ is the real deal. “It feels good to finally be recognized as one of the best,” Emmanuel Sanchez admitted. “I put so much into this and sacrificed so much, it’s nice for people to realize what my team and I already know.”

Sanchez will be watching intently July 14 when Pitbull and Weichel finally settle their beef, and regardless of the victor, ‘El Matador’ will be ready and waiting to take the strap of their hands. 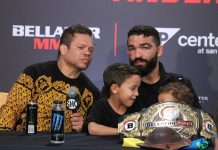