Linton Vassell believes he has the remedy for Phil Davis, and intends to prove it at Bellator 200 — then get back to a title shot, interim or otherwise.

When Bellator brings its historic 200th show to London, England, this Friday, Linton Vassell with be facing off against Phil Davis. Having challenged for the light heavyweight championship at Bellator 186 last year, it’s another high profile bout for the British striker. And potentially a quick road back to the 205lb title. With Davis himself being a former champion in Bellator, he’s arguably the biggest name available in the division, what with Ryan Bader and King Mo Lawal having recently thrown down as part of the promotion’s World Heavyweight Grand Prix.

It’s a huge opportunity for Vassell, who spoke to Cageside Press about taking part in the monumental card, and how he’s preparing for Davis, ahead of the event.

“It’s amazing, to be fighting back home and on Bellator 200,” Vassell said to us about the opportunity in front of him. “It’s a stacked card, and for me to be on it as well, that makes all the difference. And then for it to be at home — I love fighting back home. I’m buzzing.”

Unlike some fighters who worry about distractions when fighting at home, Vassell is actually thrilled to be back. “You know what, I love it,” he said. “I’ve been in America the last four years, fighting. So for me, it’s sort of new again. So yeah I do love fighting [at home]. You get distractions, but you’ll get distractions where ever you are. It’s how you handle them.” That means potentially avoiding friends and well-wishers until after the bout.

“For me, people know I’m fighting. So at the end of the day,” Vassell continued, “I’m going to contact people once I can and after I’m done my fight. They know I’m not being rude or anything. Distractions are something that happen all the time. I love fighting back home.”

There will be plenty of people cheering for him come the big night, as everyone has been “texting me up saying ‘I’m coming to the fight!'” Vassell began hearing from friends “as soon as they announced it. Bellator is growing out here. A lot of people already contacted me earlier, when tickets went on sale.”

That bodes well for the historic night. But again, it’s all about how you handle distractions. Linton Vassell isn’t worrying about any of that, he’s focusing on Phil Davis. Who could take him right back to another shot.

“There’s no one else really other than Phil to beat,” he told us. “If I beat Phil, I feel like I’m right back in there for a number one contender fight.” The path to victory? “I’m looking to go in there and dominate, and get a finish as well.”

The English fighter has done his homework, and certainly noticed Davis’ dislike of eating a punch in past fights. Plus, “I just spoke to Rumble,” he told Cageside Press. That would be Anthony ‘Rumble’ Johnson, who defeated Davis in the UFC. “I’ve seen the fight. I’ve got a good game plan for him. I’m going to go in there and utilize it.”

It’s a bout that has almost a title-fight feel to it. Asked whether Bellator should consider an interim light heavyweight title while 205lb champ Ryan Bader is off moonlighting in the Bellator World Heavyweight Grand Prix, Vassell answered in the affirmative. “Definitely. I feel like they need to do that,” he said. “If he’s going to be out and holding the title up, I don’t see why not. Or he should relinquish it. Or even give me someone else.”

“I want to fight, but at the end of the day, I do want to fight Bader again,” he continued. “Me as a fighter, I always want to have that rematch with someone I’ve already fought and lost to. Either do an interim title, or relinquish the belt, I think that’s the options that should be up for question.”

Vassell doesn’t believe, however, the he should necessarily get an interim shot right now. “No, because I lost my last fight. At the end of the day, I don’t think you should get rewarded,” for losing, he explained. “How do I get rewarded? I feel like that’s not me.”

“I don’t want to be that guy that, you come off a loss and yeah, you get a title shot. I want to work my way back up,” he stated. The loss to Bader “made me train even harder.” Something that you can expect to be on display at Bellator 200.

Vassell also has plenty of respect for the champ, who just knocked out another top light heavyweight in Bellator’s heavyweight grand prix. “That was impressive, mate. That was very impressive. One punch, and pretty much TKO’d him,” Vassell observed.

“I’ve got the remedy to beat him, and make him not want to fight no more.”

So how’s he preparing for the Davis fight (and a potential title fight, against Bader or otherwise, past that?). By focusing on the ground game “I got training partners in. I got wrestlers in to help me. That’s what I switched up,” he said. “I did a lot of ground work and defense. That was the big difference I actually did in this camp. Everything else that I do, always worked perfectly, but that was the one thing I didn’t do for the Bader camp. So I changed it up.” Those training partners included Tyrell Fortune, one of Bellator’s impressive young talents from the past couple of years.

Having been focused on the ground game since November, long before he even knew he’d be facing Phil Davis, Linton Vassell feels confident that he’ll come out with the win come Friday. Not just the win. “I feel like I’m going to finish him,” Vassell predicted.

“I’ve got the remedy to beat him, and make him not want to fight no more,” he finished.

Catch Linton Vassell Friday, May 25 at Bellator 200, taking on ex-light heavyweight champion Phil Davis as part of the main card. The action kicks off at 9PM EST on the Paramount Network. 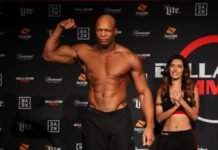 Bellator 243: Given How 2020 Has Been, Grant Neal Just Focused on Controlling What...