In a fight that was far from the brawl many expected, Dong Hyun Kim edged out a split decision over Damien Brown in a technical affair.

UFC 221 went down Saturday night (Sunday locally) in Perth, Australia, and the featured televised prelim saw Damien Brown take on ‘The Maestro’ Dong Hyun Kim. Their lightweight showdown saw Brown looking to bounce back from a pair of losses. Kim, meanwhile, was coming in with a head of steam, having won two straight against Brendan O’Reilly and Takanori Gomi.

With the action underway, Brown pressed forward, attacking Kim’s lead leg. Kim started to get his jab going. Brown then nailed a leg kick that took Dong Hyun Kim right off his feet. Brown would later score with a counter right, while Kim looked to go to the body. Kim then launched a pair of kicks to the upper thigh. He’d go high with a kick next, while Brown landed an uppercut. Though Brown was the more active in the first, the explosive finishing power of Kim was always a threat.

The second saw the pair sit back a little, perhaps a little cautious knowing that either man could finish the fight. Brown continued his leg attacks; Kim’s lead leg was starting to show the resulting damage. Brown would launch a flurry in the final minute that seemed to spark things back up again, and he managed to kick Kim’s legs out from under him one more time before the bell sounded.

Round three saw Brown pushing the pace, and Kim circling. Brown launched a body kick followed by a right. Kim answered with a left, but failed to follow it up. With both fighters showing damage to the legs, the pair slowed as time wore on, and ultimately they went to the judges’ scorecards. 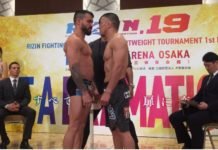 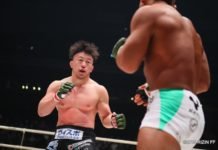