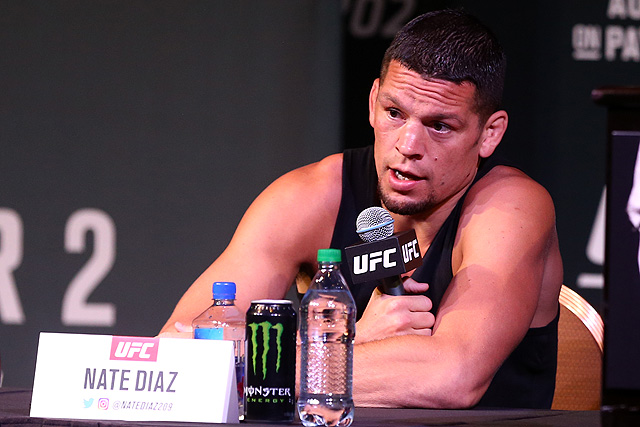 In a year where super-fights are targeted to be the norm, welterweight champion Tyron Woodley and Nate Diaz have recently discussed facing each other this summer.

In the last 24 hours, both UFC welterweight champion Tyron Woodley and lightweight stand-out Nate Diaz have been vocal in discussing a possible bout with each other in 2018. The news comes after negotiations for a bout between the two fell through this past December.

First reported by Brett Okamoto of ESPN, Woodley stated that his next bout is likely to be Nate Diaz.  Woodley is currently recovering from shoulder surgery this past December and has been vocal that he is looking for a high-profile bout that pushes him either “career-wise” or for his “legacy.”  In 2017, Woodley campaigned for bouts with Georges St-Pierre at both welterweight and middleweight as well as a champion vs champion bout with then middleweight title holder Michael Bisping.

Currently, former lightweight champion Rafael dos Anjos is the top contender in the welterweight division after defeating former champion Robbie Lawler in December.  While Woodley expressed that he was not opposed to the bout, he made it clear that dos Anjos is not his top priority.

@TWooodley man up and stop talk about fight that make no sense, everyone know that I'm the real contender. You want to fight a guy that has never beat a real welterweight in his whole life. Shame on you…

Woodley has not fought since July where he defeated Demian Maia by unanimous decision. Woodley has defended the welterweight title three times, twice against Stephen Thompson and Maia.  Per the champ, barring any setbacks, he is expected to return in the middle of this year.

Nate Diaz by comparison has not fought since August of 2016 where he lost a welterweight rematch against Conor McGregor.  Diaz became one of the most widely visible fighters in MMA following his shocking upset of “The Notorious” at UFC 196, and the rematch at UFC 202 was heralded as one of the best fights of 2016.

Recently, the UFC has offered several bouts to Diaz including a bout with former lightweight champ Eddie Alvarez and the bout with Woodley.  Both fights failed to materialize.  Diaz has stated in interviews since that he is looking to be well compensated for a return to the Octagon and feels that no situation has met his requirements.  He also stated to Okamoto that he is not interested in fighting Alvarez as he felt the former champion should have made the fight in 2015.

One thing Nate Diaz told me, not included in the story … He would "fight Eddie Alvarez in a bathroom if he wanted to say something," but not on a PPV. Nate believes the time for that fight was 2015 and he clearly holds it against Eddie that it wasn't made back then.

Diaz did say he was open to a bout with Woodley as the welterweight champion has frequently mentioned him in the media.  He stated “I think it’s my title we’re fighting for. If he’s the one calling me out, whose title are we fighting for? Who’s the real champion here?”

There has been much interpretation of Diaz’s comments in the last year that the only bout he is interested in is Conor McGregor. That’s due to the Irishman being the only bout that would bring him the money he desires for a UFC return.  However, these recent comments would indicate that is no longer the case.

Diaz discussed UFC 226 in July as a date he would be interested in for the bout with Woodley.  Its status as a summer card would also fall into Woodley’s timetable for a return.  The card is currently scheduled to be headlined by the heavyweight super-fight between Stipe Miocic vs Daniel Cormier.