UFC Norfolk this fall continues to look promising, and the UFC on Monday announced another tantalizing bout for the card. Per a release, the promotion is pairing up popular lightweights Clay Guida and Joe Lauzon, who will meet for the first time at the Virginia card. Otherwise known as UFC Fight Night 120, Anthony Pettis vs. Dustin Poirier will serve as the main event.

Lauzon (27–13), 33 years old, is coming off a loss to Stevie Ray in April at UFC Fight Night 108. The popular fighter, known for gritty performances, has been trading wins and losses since September of 2014. He’s 4-4 during that stretch.

Clay Guida, meanwhile, snapped a two-fight losing streak this June against Erik Koch. Prior to that, the 25 year old had lost two straight to Thiago Tavares and Brian Ortega. Guida (33–17) returned to lightweight in the Koch fight, however, after a rough stint at 145lbs.

UFC Norfolk takes place November 11 at the Ted Constant Convocation Center in Norfolk, Virginia. The televised portion of the card is expected to air on Fox Sports 1. 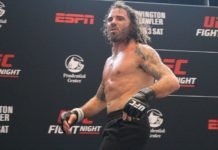