The quick knockouts kept coming at UFC Mexico City as Niko Price put down Alan Jouban early in the very first round.

Alan Jouban recently lost in the biggest fight of his career against Gunnar Nelson via second round submission after a knockdown. Jouban is one of the more exciting welterweights on the roster with three Fight of the Night performances and three knockouts. Jouban looks to bounce back at UFC Mexico City.

Niko Price has been very impressive since joining the UFC. Price submitted former top prospect Brandon Thatch then knocking out Alex Morono. Unfortunately the second win was overturned due to a positive marijuana test but a knockout is a knockout in the eyes of the fans.

Jouban threw a leg kick that was caught and countered cleanly by a right straight that wobbled Jouban. Price closed in and landed a head kick that knocked down Jouban. Price pounced for the finish and got it quickly. The stoppage was well-timed though, as Jouban clearly needed the fence to help him stand up.

Niko Price might end up in the rankings following his third stoppage victory in the UFC over the very respected Alan Jouban. Price stands undefeated at 10-0 (one no contest) with nine stoppages but will need a win over a ranked opponent to truly secure a spot in the top 15.

Jouban now has lost two in a row and should probably take a bit of a break from being the very active fighter he is. Jouban has fought 10 times since joining the UFC three years ago. 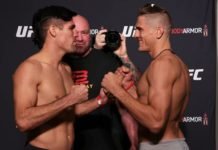