UFC 215, originally planned for an August 19 date at a venue and location TBA, has been scrapped, according to a curiously worded statement on the promotion’s official website today. As a result, Edmonton’s UFC 216 will take its place, and be renamed to UFC 215. No reason was given for the move.

In a statement on UFC.com, the promotion explained that

The event marks the promotion’s first visit to Edmonton. An originally planned August Pay-Per-View event has been removed from the schedule.

While August’s UFC 215 was never officially announced, there were strong indications the promotion was planning to head to Seattle, and have Demetrious Johnson defend his flyweight title. Then, Johnson and the promotion had a falling out over the UFC trying to force the pound-for-pound star to fight bantamweight T.J. Dillashaw. With options to headline the August PPV dwindling, it seems the promotion thought better of hosting the card period.

Then there’s the McGregor factor. With Floyd Mayweather vs. Conor McGregor slated for August 26, the promotion may not wish to divert fan dollars from what will no doubt be a gigantic payday for all involved. Especially when the perspective dates were just a week apart.

That means UFC fans will have a bit of a lull at the end of Summer — but it’s great news for the newly christened UFC 215 in Edmonton, which should now have more options for its own card. No headliner or co-headliner has yet been announced for the event. 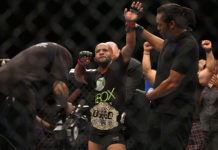 UFC: What’s Next for Mighty Mouse Now That He’s Made History? 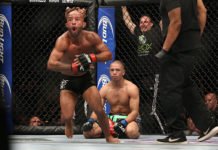