After all the weirdness leading up to UFC 216’s main event — Tony Ferguson getting into it with Fabricio Werdum, a fake interview with Matt Serra, Kevin Lee almost blowing weight — it seemed like a relief when the fight finally came. Which it did, Saturday night at the T-Mobile Arena in Las Vegas, Nevada. The city, still reeling from the devastating attack at the nearby Mandalay Bay, a former hotspot for the UFC, came out in force (and the UFC reached out to first responders, offering them free access to the event). By the time Ferguson vs. Lee rolled around, the crowd was definitely in the mood for a great scrap.

They got just that.

Curiously, Lee appeared to have a staph infection on his chest in the cage, something not present at the weigh-ins (he’d later confirm it was indeed staph).

In the opening round, Ferguson flashed his unorthodox style early, while Lee launched a high kick. Lee was able to land a right hand despite Ferguson’s efforts to keep him at arm’s length; Lee was then wobbled by a hard leg kick.  Lee then caught Ferguson with a punch (which actually turned out to be an eye poke), but was himself rocked by a punch charging in. A takedown by Lee not long after then backfired as Lee found himself in a triangle with his arm trapped. He would escape, aside from his arm, that Ferguson held on to for a while longer. Lee then transitioned to the top and moved into full mount, dropping some heavy shots from above. Ferguson would survive the round, however.

The second saw Ferguson land an overhand right early. Lee, when firing, was putting everything he had behind it. That may have been an iffy strategy, as later in the round he appeared to tire. The pair traded body kicks, and Lee would shoot for a takedown. Ferguson was able to stuff that, and the pair traded leg kicks to end the round. Between rounds, Lee appeared the more winded of the two.

Round three, and they were jawing at each other before the action got underway. Lee would manage to get on top early, but Ferguson was able to escape. Despite the fatigue, Lee continued to press and was able to score another takedown. However, Ferguson locked in an arm-bar and looked like he might have it! Lee, however, was able to step over and escape the hold. That was certainly a near-finish. The sequence left Kevin Lee on top, while Ferguson brought his leg across the back of Lee’s neck. Wrenching down on Lee’s neck, Ferguson continued to squeeze the triangle tight, forcing the tap! With that, Tony Ferguson became the UFC interim lightweight champion of the world.

During the post-fight interview, among a litany of profanities directed at Conor McGregor, who he called McNugget, Ferguson stated that “you’d better come and defend that belt” in regards to the UFC lightweight championship. 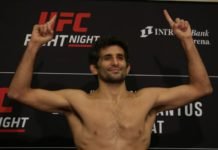