His first fight in the UFC was against Hall of Famer BJ Penn, he has victories over Clay Guida and former welterweight champion Matt Serra. Of course, he is mixed martial arts pioneer Din Thomas.

Today’s generation of MMA fans most likely know Din Thomas from Dana White’s Lookin’ for a Fight, or the new Fight Pass show, Tuesday Night Contender. However, before Thomas was an extremely likable MMA personality, he was an incredible fighter in his own right.

The grappling ace made his debut in June of 2001 against BJ Penn. Ironically enough, Penn is still fighting and had a bout with Dennis Siver just two days after this interview took place.

“I wish he would retire”

“I wish [Penn] wasn’t [still fighting] honestly. What surprises me is that so many guys don’t develop any other skills in life while they fight.”

He offered one final piece of advice for Penn: “I wish he would retire. BJ is one of the best to ever do it. At some point he is tarnishing his legacy, he continues to go out there and embarrass himself.”

Din Thomas returned to MMA two years after a three-fight win streak in smaller promotions, including a win over former UFC competitor Dustin Pague. He split the final two fights of his career, but the victory was overturned to a no contest. Regardless, Thomas did not hang around too long like many fighters tend to do nowadays.

“In your head, you still think you can do it, but you can’t, it doesn’t last forever. I feel bad, there are so many fighters that can’t let go of the dream and they are holding on to something that’s just not there anymore.”

Something that has really helped the MMA pioneer in his post-fight life has been training young up and coming athletes at American Top Team.

“I will say this, I really learned the finer nuances of mixed martial arts when I started coaching full time. I still get the challenge of putting together game plans and making people better, it’s very difficult because fighters are the most hard-headed childish human beings on the planet.”

Lately, in the world of MMA, you can’t go anywhere or read anything without hearing about the Conor McGregor-Floyd Mayweather fight. Be that as it may, when talking to one of the sport’s biggest personalities you have to delve into his thoughts on the crossover fight of the century.

“I love what McGregor has done. Coming from nothing in a short amount of time and leveraging himself into the position he is in to fight Floyd. I don’t see how Conor can be competitive in this fight at all, we have professional boxers at the gym and they don’t spar with the MMA guys for a reason, that reason is that they are just way better.”

He ended the McGregor talk with a sobering truth, “We’re talking about a guy who is 49-0. I’m not 49-0 in anything ever in my life, McGregor isn’t even undefeated in his own sport.”

As mentioned, you can catch Din Thomas on the UFC Fight Pass original series Dana White’s Lookin’ for a Fight. 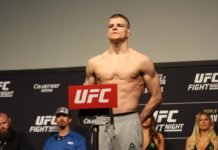