UFC 212 went down Saturday night from Rio de Janeiro, Brazil. With a title unification bout in the main event between featherweight champ Jose Aldo and interim champ Max Holloway, and perhaps one of Vitor Belfort’s final octagon appearances, it proved to be an exciting card.

In the co-main event of the evening, a pair of top strawweights (and former title challengers) met to determine who the best fighter in the 115lb division not named Joanna Jedrzejczyk was. Claudia Gadelha, who has twice lost to Joanna Champion, met Karolina Kowalkiewicz in a fight that could potentially shoot one of the pair back into contention. In the end, it was a fight that shocked based on how one-sided it was.

The first round opened with Karolina Kowalkiewicz throwing out a right, while Claudia Gadelha looked to answer with one of her own. Karolina was quicker to mix in some combos, while Gadelha went to the body with a kick. Kowalkiewicz worked in some stance changes, moving in and out of southpaw, but Gadelha managed to catch her with a standing elbow. After some more standup work, Gadelha managed to wrench the Polish fighter to the ground, and soon had her back, looking to get hooks in. In little time she managed to sink in the rear naked choke, with the tap coming just seconds later. With the win, Gadelha became the first woman to finish Kowalkiewicz.

After the fight, Gadelha spoke of the need to grow as a fighter. She went on to say that “I am a new fighter, this is the new Claudia right here, and it’s going to be f***ing hard to beat me, man.” The question now becomes, will the UFC want to book her against Joanna Jedrzejczyk given she has lost to the champion twice, or will they wait until Jedrzejczyk either loses, or moves to flyweight? 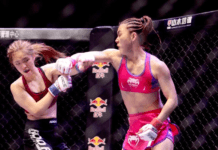 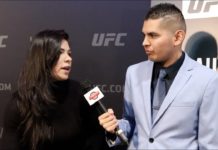