Alexander Gustafsson defined what was a striking showcase when he knocked out Glover Teixeira in the fifth round at UFC Stockholm with a beautiful four-punch combination.

The Swede stepped into the octagon as the number-one ranked contender in the UFC’s light-heavyweight division.

Despite his last fight being over eight months ago, a fairy uneventful decision win vs. Jan Błachowicz, the departures of the likes of Anthony Johnson and Ryan Bader meant a lack of clear contenders at 205-pounds.

Glover Teixeira found himself in a similar position to the Swede. After suffering a disappointing loss to Johnson, the Brazilian bounced back in his return to the octagon, when he defeated Jared Cannonier by unanimous decision in February at UFC 208.

That took us to UFC Fight Night 109 Sunday. The Swede favoured the right uppercut that caught Teixeira on several occasions in the first round. Gustafsson would land a strike then proceed to dart out of the way, dashing away from Glover’s counter shots.

A spinning elbow stunned Teixeira and Gustafsson swarmed on the Brazilian causing him to fall to the canvas. Recovering well but badly bloodied up, Teixeira did a great job of maintaining composure and proceeding to engage with Gustafsson.

Dropping Teixeira again, ‘Gus’ fell into his open guard and rained down elbows to try and finish the fight. Constantly landing the right uppercut without telegraphing it at all, the Swede’s striking looked impeccable.

THAT'S IT!!! @AlexTheMauler walks off on Teixeira and gets the 5th round KO!!! #UFCStockholm pic.twitter.com/1FOPTpuRht

At the start of the fifth and final round, Gustafsson landed three brutal uppercuts and then finished the show with a right hook to send Glover crashing to the canvas and forcing referee Mark Goddard to stop the action.

Mid-way through his post-fight interview, Gustafsson invited his girlfriend into the octagon and got down on one knee to propose to her. To the roar and shock of the crowd, she said yes! Placing the ring on her finger to make his victory even sweeter than before. 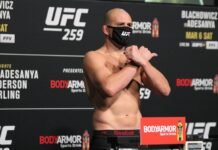