The UFC’s first quarter of 2023 is starting to shape up, and flyweight action is the first scrap reported for a previously unannounced card on March 11.

No venue, location, or broadcast plan is set for the date, but 125’ers Tyson Nam and Bruno Silva are expected to throw down where ever the event lands. MMA Fighting was first to report news of the booking on Wednesday, with Nam subsequently confirming the match-up.

Hawaii’s Nam, now 39, took the long road to the UFC, finally making it to the promotion in 2019 after a lengthy career on the regional circuit, plus a contract dispute with Bellator that prevented him from signing with the UFC earlier. Having turned pro in 2006, he was 28 fights into his career by the time he arrived in the promotion, and has since posted a 3-3 record.

Silva (12-5-2, 1NC), a.k.a. “Bulldog,” enters the fight off back-to-back wins against JP Buys and Victor Rodriguez. The Brazilian finished both fights inside the distance. 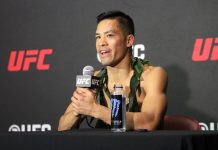