A champion in every major promotion she has competed for — Strikeforce, Invicta FC, the UFC, and Bellator MMA — Cyborg (26-2, 1NC) had a tumultuous relationship with Dana White and co. Initially, the UFC refused to open a women’s featherweight division upon signing Cyborg, insisting the Brazilian make a grueling cut to 140lbs for catchweight fights. While she would go on to win gold when featherweight was opened up for the ladies, the female fighting legend had a frosty relationship with her boss, not helped by White’s past jabs at her, including the infamous “Wanderlei Silva in a dress” taunt.

Cyborg’s run with the UFC came to an end in 2019. The previous December, she lost her title to Amanda Nunes; a rematch was pursued, but never materialized. Instead, she exited the company off a win over Felicia Spencer at UFC 240.

Asked about a return to the UFC ahead of her professional boxing debut on September 25 in her native Brazil, Cyborg told MMA Junkie that, unless the UFC decides to start paying its fighters, her time there is done.

Earlier this year, Cyborg appeared in a music video produced by Jake Paul, dragging Dana White and the UFC over its pay scale and treatment of fighters. Needless to say, fighter pay has been on her mind for a while.

Cyborg will be in action against Simone Silva in Brazil at Fight Music Show 2 on Sept. 25, 2022 in her pro boxing debut. After that, another defense of her Bellator women’s featherweight title, potentially against Cat Zingano, could be next. 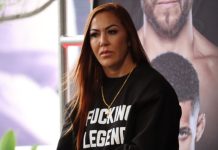