The busiest folks at the UFC Apex on Saturday, which played host to UFC Vegas 60, may have been the cageside physician, and the cutmen.

While there was little hype heading into the Fight Night event, a pair of deep, gruesome cuts in the co-main and main events will not be something fight fans soon forget. It certainly helped that both fights were bloody entertaining — emphasis on the bloody.

The main event pairing of Cory Sandhagen and Song Yadong resulted in China’s Song being opened up early in the fight, the gash inconveniently placed over his left eyebrow. After being looked at by the cageside doc repeatedly, the wound worsening in the fourth round finally led him to wave off the bout. Song later revealed that he was unable to see out of the eye, reaffirming that the doctor had made the correct call.

The cutman is really earning his paycheck tonight #UFCVegas60 pic.twitter.com/faF7j1kb6K

If Song’s cut was nasty, the cavernous wound displayed by Gregory “Robocop” Rodrigues was something else entirely. Care of a Chidi Njokuani knee early in the middleweight main event, the injury didn’t appear to effect Rodrigues much in the fight itself. He would knock Njokuani down in the first round, and finish him with ground n’ pound in the second.

UFC President Dana White posted before and after photos of the gnarly cut following Saturday’s event, and they are truly something to behold. 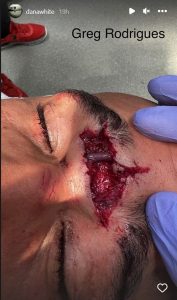 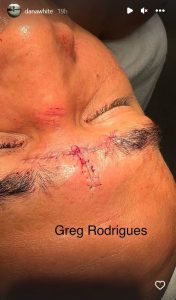