A UFC fighter twerks at weigh ins, a former legend retires, and Darren Till responds to Marvin Vettori in this abbreviated edition of our Sunday MMA Quick Hits. Let’s go!

Bare Knuckle FC champion Reggie Barnett Jr. was listed as missing and endangered this past week by police in Virginia Beach, but thankfully, this story has a happy ended.

Barnett’s fiance initially posted an emotional video to social media revealing that Barnett had no-showed an open gym session, and had not returned home as planned on Sunday. Virginia Beach PD issued a missing persons alert, as did state police, noting that there were concerns for Barnett’s “mental health due to vague threats of suicide” (via MMA Junkie).

Shortly before his disappearance, Barnett was reportedly with his “sponsor” from a substance abuse program, taking her to a nearby airport, but had dropped the woman off after just a few minutes and was allegedly intoxicated.

Thankfully, on Tuesday, Barnett’s mother confirmed the fighter had been found. “Thank you everyone for all your prayers and love Reggie has been found alive and safe.”

Barnett picked up an interim title in his last fight, winning a technical majority decision against Jarod Grant at BKFC Fight Night: Tampa 2.

It was kind of a given, since he hasn’t competed in years and recently decided to pursue a political career — but Wanderlei Silva has officially retired from mixed martial arts.

The former PRIDE, UFC, and Bellator MMA fighter announced the news on MMA Fighting’s Portuguese-language podcast Trocação Franca. And while he’s retiring from competition, the family name will live on in the sport, as son Thor looks to follow in his father’s footsteps.

Thor, 19, is set to make his amateur MMA debut in the near future.

Silva’s last fight came in 2018, when he fell to Rampage Jackson in a fourth fight that came years too late (Silva won the first two encounters, Rampage the second two). Prior to that, he dropped a fight to rival Chael Sonnen. Both bouts came under the Bellator MMA banner, but it was PRIDE and later the UFC where “The Axe Murderer” found glory. While never winning a major title, Silva (35-14-1, 1NC) was a fan favorite and a downright scary human being to be locked in a cage with. His wars with the likes of Brian Stann, Cung Le, Rampage, Dan Henderson, Chuck Liddell and others are still fondly remembered, as was his willingness to fight anyone, including heavyweights Mark Hunt and Mirko Cro-Cop.

Silva also has a win over Japanese legend Sakuraba.

An otherwise pedestrian UFC Paris weigh-in got a bit of an extra show when women’s featherweight newcomer Ailin Perez, clearly in good spirits, decided to twerk for the crowd.

Perez, a.k.a. “Fiona” (yes, named for Princess Fiona from Shrek), hails from Argentina, and was clearly having a blast ahead of her first UFC fight. She also opted to tease the crowd prior to stripping down for the ceremonial weigh-ins, and earlier in the day, hollered “championship weight” as she hit 144.5 at the official weigh-in.

Fiona (@AiluPerezUFC) shows off her moves and does a little twerking at today's ceremonial weigh-in.

Tomorrow night, she'll show off her moves in the cage against Stephanie Egger. #UFCParis pic.twitter.com/pvLef6KM9c

Also comebacks go, calling someone an “orc” is very timely, what with Amazon’s Rings of Power series set to debut.

Of course, Israel Adesanya has called Vettori an orc in the past, which is more likely what got the label going.

In any case, Marvin Vettori called fellow middleweight Darren Till “irrelevant” and “delusional” during the UFC Paris media day, when the idea of fighting the Brit was floated (mainly as a replacement for Robert Whittaker after the pair’s June date fell through, though Whittaker made it to fight night on Saturday).

“Marvin, listen, you big stupid b*stard: I wish you all the best this week in your fight,” Till told ESPN in a recent interview. “I hope you do really well because you’re a great fighter. But let’s get one thing straight, brother: Right – I’m 29. When I’m healthy, it’s just fight, fight, fight. That’s all I’ll be doing.

“There’s nothing I think about more than just fighting, so what are you talking about, mate? Stop trying to put me down, you big stupid orc b*stard, because we’re going to meet one day and I’m going to drive my fist through your face.”

No explanation needed for this one. Tai Emery, a former lingerie football athlete, gave the fans a show in celebration of her BKFC Thailand 3 win on Saturday.

Welp, thats one way to celebrate a win. Welcome to BKFC! 🙈👀

“Interesting celebration, haven’t seen that one before” pic.twitter.com/cWT5TeUo1X 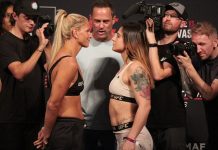 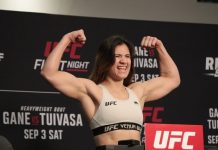