The UFC Paris card on September 3 has undergone a slight change.

With Christos Giagos out, Benoit St. Denis (9-1, 1NC) will now face promotional newcomer Gabriel Miranda (16-5) in a lightweight match-up at the event. Cageside Press confirmed the booking on Tuesday, following an initial report by Eurosport.

Miranda recently announced that he had signed with the UFC — and he’ll be debuting on the same night the promotion makes its own debut in France.

Giagos reportedly pulled out of the bout due to injury.

France’s St. Denis will be looking for his second win inside the octagon come September 3. In his last outing, St. Denis submitted Niklas Stolze via rear-naked choke in the second round of their UFC Vegas 56 fight. A former Brave CF athlete, St. Denis dropped his debut in the UFC to Elizeu Zaleski.

Miranda is also a veteran of Brave CF, though the pair never crossed paths there. The 32-year old Brazilian has won three straight fights.

The UFC Paris card takes place at the Accor Arena in Paris, France, with the following fights having been reported for the show: 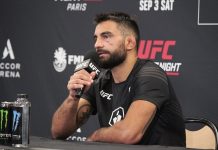