The September 20, 2022 edition of Dana White’s Contender Series will make a little bit of history when Raul Rosas Jr. competes.

ESPN Deportes was first to report news of the match-up.

While all five of Rosas Jr.’s pro fights have come as a 17-year old (he turned pro last October), he did take a couple of amateur bouts starting in 2020. According to NSAC regulations, the acceptable range for fighters seeking to be licensed in the state is 18 to 38 — but exceptions can be made pursuant to a review by the athletic commission.

Currently, Chase Hooper holds the record as having been the youngest fighter to debut in the UFC. Also a veteran of Dana White’s Contender Series, he arrived in the UFC at age 19.

All of Rosas Jr.’s fights have come under Mexico’s UWC, with the exception of one amateur bout.

Opponent Gutierrez is an LFA veteran. At 25, he’ll have the obvious advantage in age and experience, and enters the fight off three straight wins, including one over Chaka Worthy — brother of former UFC fighter Khama Worthy. Gutierrez’s lone loss came to Mo Miller, who picked up a win on the Contender Series in 2020, but was not awarded a contract. 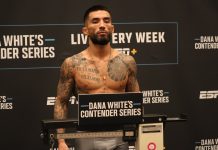 DWCS 55: Mando Gutierrez Doesn’t Care About Opponent’s Age: “I’d Fight A 12-Year-Old If I Had To”