Promotional newcomer Akhmed Magomedov put away Kevin Boehm inside of a round at Bellator 283, submitting his opponent and making a statement in his debut.

“I took this fight very, very seriously and I prepared well,” Magomedov (8-0, 1NC) said following the fight, speaking via translator to media outlets including Cageside Press. “I was ready for three rounds, whatever comes my way but I’m happy I got the win early and I finished him.”

Magomedov (8-0) is yet another dangerous, undefeated Dagestani fighter, a region of Russia that has become known for producing some of the most formidable fighters in the sport. While Khabib Nurmagomedov put the region on the map, others like Usman and Umar Nurmagomedov, Islam Mamedov, and now Akhmed Magomedov are now carrying the torch.

With his first win under the Bellator banner secured, Magomedov is looking to get a ranked opponent next. Hopefully soon.

“I’m ready right now. I’m ready any time. I don’t have any injuries,” Magomedov stated. “Hopefully Bellator will give me something in the next two, three months. But I’ll be ready. I’m hopeful that they’ll give me someone from the top 15. I’m confident, I’m pretty sure I’ll walk through any of these unranked opponents, but I’m ready for anybody.”

Watch the full Bellator 283 post-fight media appearance by Akhmed Magomedov above. More coverage from the event can be found below. 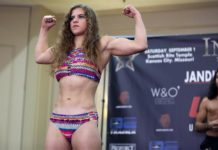