With Bellator in action Friday, a number one contender’s fight is set between Adam Borics and Jay Jay Wilson — two prospects looking to break through as legitimate contenders. The PFL has a big show as well as their post-season continues, so let’s get on with this week’s MMA prospect report!

Harrison is a very accomplished grappler who won the gold medal in judo at the 2012 and 2016 Olympics and gold at the 2011 and 2015 Pan-American Games. Along with that she is last year’s PFL million-dollar winner. The judo practitioner holds a black belt in her sport and has won two national championships. Harrison has been dominant thus far in her MMA career. Her wrestling and her judo have been on full display and once on top, she’s a nightmare. Harrison is just dominant on top. Her grappling is high level and she is both a submission threat and has fight-stopping ground and pound. She’s unstoppable. Harrison fights Genah Fabian (4-1).

Cappelozza may not have a great record nor is he the youngest but he is a nightmare opponent. In the last six years, he’s only lost to Jiří Procházka. Cappelozza is all action and violence. He has some strong wrestling but on the feet is where he’s at best. Everything he throws is with ill intentions whether if that’s with his hands or legs. Right away Cappelozza asserts himself as a big danger win or lose. He fights Jamelle Jones (12-6).

“Problema” is a giant standing at 6’10” who comes out of Rio de Janeiro, Brazil. Through his first six victories, Ferreira had a perfect finish rate. All those finishes came by TKO, mostly by ground-and-pound. On the feet, he does hit hard, has heavy leg kicks, and a good jab. Ferreira is a problem on the mat, and being such a big guy, does not let up with his heavy ground strikes. His wrestling isn’t great but he uses his size to get the fight down. He fights Stuart Austin (15-6).

The Kiwi has displayed beautiful jiu-jitsu and has showed that once he gets the back he has a fantastic rear-naked choke. His wrestling is good and his overall ground game is high-level. On the feet Wilson just throws with the flow and has a nice overhand right. Everything is to close the distance to get where he’s most comfortable at.

The 26-year-old from Hungary has a background in Thai boxing and karate but is more effective on the mat. On the feet, Adam Borics is explosive and has good extension on his strikes. His takedown defense isn’t where it needs to be, but he is excellent at locking up the triangle with three of his five submission wins by triangle. Borics is a dangerous fighter no matter where the fight goes.

Lugo has been very impressive in his career to date, including wins over John Douma, Cortavious Romious, and Cass Bell who are all good fighters. Lugo does have a grappling game but on the feet is where he excels. He’s a tricky fighter who utilizes his striking from the end of his punches. He holds his hands low to his waist in what could be a problem but it allows the angles he uses to stay hidden. He has really good hands. Lugo frequently switches stances giving different looks. Overall a young and talented fighter. He fights Keith Lee (7-4).

Kim doesn’t look like much of a fighter but his resume says otherwise. On the mat, he has some skills with three submission wins. He is better on the feet with his technical ability and pressure. Kim is constantly walking forward throwing crisp straight punches and hooks with his hands. He also has really good knees when he closes the distance. Last fight he beat Husein Kadimagomaev which was an awesome win handing him his first loss. He fights Nurzhan Akishev (11-2).

Almabaev has a background in freestyle wrestling, was a national champion in jiu-jitsu, and has a BJJ world cup. He’s on a current six-fight win streak taking out fairly decent competition. On the feet Almabaev is quick, he has good fast hands, and he throws a lot of volume with combinations. His takedown defense is his glaring weakness but his good BJJ bails him out of bad positions. He’s mostly well-rounded and with proven cardio, he’s a solid fighter. He fights Aleksander Doskalchuk (10-2).

Fighting out of Ukraine, Aleksander Doskalchuk is on a current seven-fight win streak and is the former M-1 Challenge champion. Doskalchuk is a nine-time champion in pankration, a 2007 karate champion, took first place in the European pankration championship, and is the winner of the World Cup in pankration in 2011. On the feet, Doskalchuk has solid footwork and likes to stay long with his jab and is very accurate. Doskalchuk is better versed on the mat as his top position is very strong. He fights Asu Almabaev (12-2).

Magomedov has a background in freestyle wrestling and was the Russian National Jiu-Jitsu champion in 2017. The Russian only has seven fights, but three finishes, getting it done on the mat with submissions and ground and pound. Magomedov as you can expect is an excellent wrestler. He’s a smart fighter and could be someone to watch for in the future. He fights Ilyar Askhanov (9-3).

Adam Bramhald has some experience in kickboxing going 4-0 in K-1. Only losing to good fighters in Luke Shanks and Scott Malone, he has a promising future. On the feet, he’s very technical and throws a lot of output with frequent combinations. Bramhald is dynamic and does a great job throwing with his punches and kicks. Not the most powerful but has everything else. He fights Cyrus Besharate (5-1).

I’m not fully sold on Bogdanović but he’s got some potential. He’s primarily a wrestler/grappler. Not much on the feet and that’s why he usually shoots for the legs early. Bogdanović has a solid single-leg takedown he uses to get the fight down. Real proficient on the mat, he’s methodical with his transitions. Bogdanović has four submission wins including a north-south choke which is something you don’t see often. He fights Shamil Kasumov (6-0). 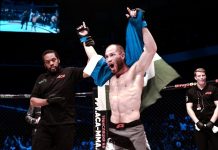