Archie Coglan got to fight, and win, on his birthday — and made the most of it.

Coglan (5-0) finished Bryan Nuro with a right hook in the third round at Bellator 283 on Friday. His short career has seen him fight for LFA, Eagle FC, and now twice for Bellator, and the welterweight has actually taken his last two match-ups at 160 pounds.

With the fight coming on his birthday and the opponent stepping up on short notice, Coglan agreed it was his most satisfying win to date. “We’ll just go with this one. I’m very proud of this one. Three weeks ago when I got this phone call, I hadn’t trained in a week and a half,” he explained during his post-fight media appearance. “I was in good shape, I had been training for months prior to that, but when I got the call, I had torn cartilage in my rib, and I had to take some time off to rest it.”

Coglan is proud of overcoming to the injury, and of competing and performing on his birthday. Now, he’s hoping to return in the fall, sharing a card potentially with a teammate.

That said, there’s no names on his hit list — in fact, there’s no list. “I wouldn’t say I have a hit list or anything, at the moment. That will come for sure,” Coglan stated. That having been said, Coglan had been matched up with Justin Montalvo originally, and would like to get that fight back. “I think he’s a good striker and he’s a good fighter. I would still like that fight. I don’t know what happened to it and why it fell out, but it did. If that’s doable— if he was not able to fight because of his health then it is what it is, but if not, then I’d ideally like to see that one.”

Watch the full Bellator 283 post-fight media appearance by Archie Coglan above. More coverage of the event can be found below. 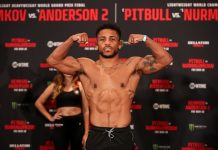 Archie Coglan On Bellator 288 Foe Hannam: “I Know He’s in Trouble, I Know That.”